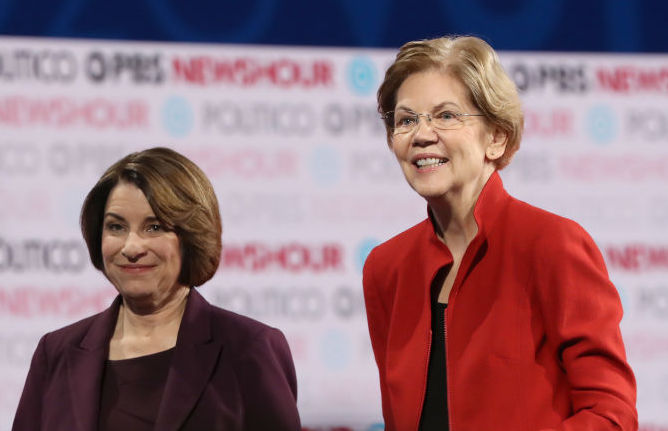 The New York Times editorial board, in an unprecedented move, announced on Sunday night that it was formally endorsing two candidates to be the best choices for the lone 2020 Democratic nominee to take on President Donald Trump: Senators Elizabeth Warren and Amy Klobuchar.

In what the paper’s editorial board called “a break with convention,” it offered a Solomonic solution to the dilemma of which candidate to endorse, by effectively not picking one at all and instead choosing candidates from competing wings of the Democratic Party, the staunchly progressive Warren and the more moderate Klobuchar.

“On the Democratic side, an essential debate is underway between two visions that may define the future of the party and perhaps the nation,” the editorial board wrote. “Some in the party view President Trump as an aberration and believe that a return to a more sensible America is possible. Then there are those who believe that President Trump was the product of political and economic systems so rotten that they must be replaced.”

The paper has boasted that its vetting process for the 2020 Democratic nominees was the “most transparent endorsement process to date,” having transcribed and annotated unedited interviews with every candidate as well as having released numerous video clips of its candidate interviews. For added context, here is transcript of the Times editorial board’s interview with Warren in early December and their interview with Klobuchar almost one week later.

Such a visible stamp of approval could be act as important symbolic victory for a candidate like Warren whose poll numbers have sagged in the past few months and whose momentum in early states has seemingly stalled. Klobuchar could benefit even more, since her campaign has yet to gain any real momentum nationally, and has been unable to break into the top tier of candidates in her neighboring state of Iowa as well as in New Hampshire.

The Times cited its dual endorsement as something of a more daring choice, given its track record.

“The history of the editorial board would suggest that we would side squarely with the candidate with a more traditional approach to pushing the nation forward, within the realities of a constitutional framework and a multiparty country,” the editorial board wrote. And the Times does have a reputation for backing more of the safe, establishment candidates, having picked Sen. John Kerry to be the Democratic nominee in 2004 and Hillary Clinton during the both 2008 and 2016 Democratic primaries.

“There will be those dissatisfied that this page is not throwing its weight behind a single candidate, favoring centrists or progressives,” the Times editorial board concluded, preemptively addressing a sure-to-be criticism of its split-the-baby decision. “But it’s a fight the party itself has been itching to have since Mrs. Clinton’s defeat in 2016, and one that should be played out in the public arena and in the privacy of the voting booth. That’s the very purpose of primaries, to test-market strategies and ideas that can galvanize and inspire the country.”

“Ms. Klobuchar and Ms. Warren right now are the Democrats best equipped to lead that debate,” the paper added. “May the best woman win.”