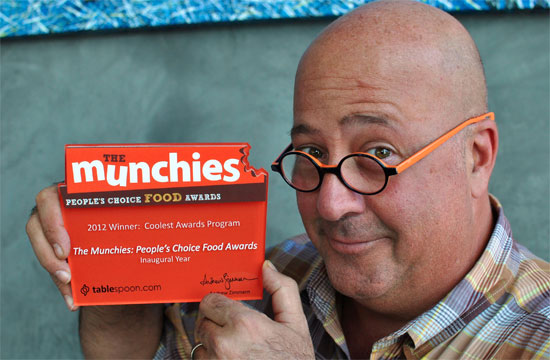 Like a backyard version of the James Beard Awards, the second annual Munchies: The People’s Choice Awards, hosted by Andrew Zimmern and Tablespoon.com, were announced this morning. For those of you continuing to nurse a James Beard hangover, here’s how the Munchies work: Zimmern and a panel of 26 experts (chefs, journalists, and media personalities alike) compile a list of nominees in each culinary category which are then open to a public vote.

Some recognizable names can be seen below, like Alton Brown (who thanked his fans for the Best TV Personality win via Post-It), Roy Choi (whose Kogi BBQ was named Best Food Truck), Thomas Keller (for writing Bouchon Bakery), and Hugh Acheson (for just being The Best Chef).

The full list can be found below, and congratulations to all! Long live the democratic process, even though it appears to heavily skew Midwest.