Around the World in 80 Plates Season Finale

Who Was Crowned The Winner Of Around The World In 80 Plates? 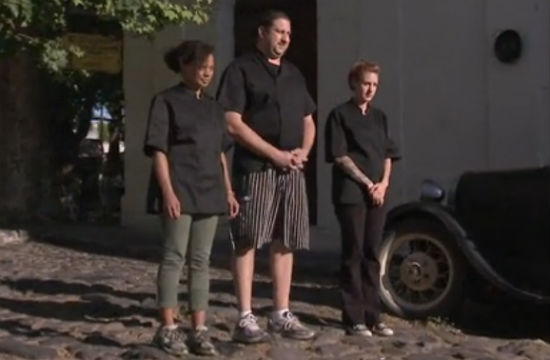 Last night was the highly anticipated season finale of Around the World in 80 Plates. It was so highly anticipated, in fact, that Andrew Zimmern lamented not having Bravo in his hotel room last night via Twitter. Look away if you don’t want to get spoiled, Andrew!

The final three, Liz, Nookie, and Avery, jetted off to Uruguay to complete THE COURSE. The challenge? To run around the city shopping for whatever ingredients they wanted to cook whatever they wanted for some mystery diners. The guests they’d be cooking for, they later found out, were none other than hosts Cat Cora and Curtis Stone, who shared a romantic little street-side table. Feel free to take a moment to ponder what pretty babies they’d make; we did. Okay, now come back, because it’s never going to happen.

While Liz’s dish was tasty, she forgot to buy salt and Nookie wouldn’t loan her any, so her dish came out under-seasoned. Nookie’s strategy to cook for the locals backfired when Cat and Curtis determined that his dish was overly simplistic, since he used store-bought chorizo and onion marmalade, and didn’t do much actual cooking. Avery won the challenge with chicken, and, for her EXCEPTIONAL INGREDIENT, she got to choose who she would compete against in the final takeover.

So, anyway, everyone headed Stateside for the final takeover, because the location was none other than sunny Los Angeles. So exotic! The final challenge was to cook a three-course menu, with each dish representing a destination on the journey.

The “locals” voting on the dishes were various Michelin-starred and James Beard Award-winning culinary figureheads from around LA. Oh and Wolfgang Puck, grand-daddy of translating cuisines for an American palate (ie., master culinary imperialist?), was there too. Ultimately, with just a four-vote margin, Avery won Around the World in 80 Plates, $100,000, a shiny new Infiniti, and the eternal disdain of a burly Bostonian.

We’re still too busy processing Nookie’s demise and how we feel about it to congratulate Avery properly. What do you guys think of the way it all played out?