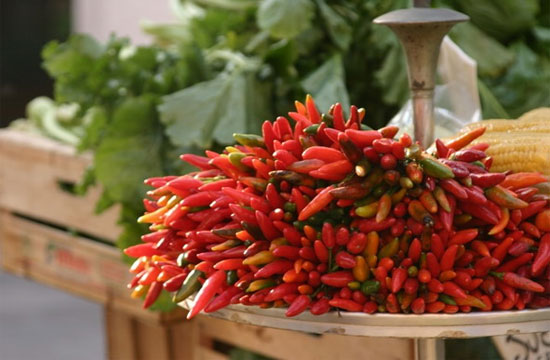 You, scared person, cowering outside Andy Ricker’s Pok Pok behind a fixie bike — are you too frightened to walk inside and eat? Might you tremble in fear of the legendary reputation of Thai cuisine’s mouth-scorching spiciness? Do you call it “Thai Spicy” and do you assiduously avoid it when it appears on a menu? Do you think your mouth will shrivel and blacken, like a slave owner from Game of Thrones? Stop your sniveling cowardice. You’ll be fine. Ricker says so. (Maybe in not as judgemental a tone as we just used, though.)

In the middle of a standard “seven questions” interview with Chopsticks and Marrow, Ricker’s given a question about ordering something “Thai spicy,” with the normal result of turning into a fire-breathing dragon. First, he laughs at the idea that Thai food is supposed to be painfully hot — “that’s because they often simply chuck in a shitload of crushed dry chilies to satisfy the farang’s [a generally white foreigner] need to prove something to themselves or their friends” — but then seriously crushes the entire “spice” reputation:

First of all, not all Thai food is spicy, not by a long shot. Certain dishes are inherently spicy because of cooking traditions and regional preferences as well as flavor balance. For instance, the Southern Thai curry kaeng tai plaa (Sripraphai makes a good version of this) is typically very hot, a little bit bitter, not sweet at all and very fishy tasting. To order kaeng tai plaa “mild” and “sweet” “with tofu” would throw all the rest of the flavors out of balance and make a mockery of the original concept, which in the right hands can be an absolutely amazing dish…

Second, not all Thai people like to eat spicy food (and by “spicy” I am referring to chile-hot, which is not the same thing as spicy in Thai culinary tradition). I have many friends in Thailand who are more fearful of hot foods than Americans typically are.

Third, there is no standard for chile-hot so the whole “star” system in use at many restaurants has no real meaning; “Spicy” is such a subjective thing from person to person as to be impossible to codify. Typically, the Thai table has condiments on it (fish sauce and Thai chilies, crushed dry chilies, fresh herbs, aromatics, etc. depending on the type of food you are eating) for diners to adjust the flavors themselves.

Tl; dr: stop being such a dumb farang.