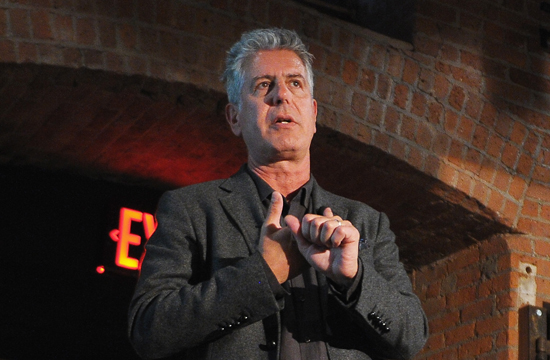 Perhaps hearing all the rage over his appearances on The Taste, Anthony Bourdain penned a blog post for Entertainment Weekly to defend his experience on the show. His message? It was Something He Legitimately Enjoyed. Maybe even His Favorite Hangout With Best Friend Nigella Lawson. (We will note, however, that Brian Malarkey is not even mentioned in the blog post, possibly hinting that he doesn’t even register with Bourdain as a human being.)

Are we convinced that Bourdain feels true joy on network reality TV? Meh. But we believe him when he says that he learned a few things, particularly about women (and the four “not-unattractive” ones who randomly ended up on his team):

I saw this as karma — and as proof of something when I found out. It made me want to win all the more. It also made me all the more painfully aware of all the loud chest beating and man-growls — the obnoxious miasma of airborne testosterone wafting over from adjacent stations. As the father of a 6-year-old girl, I already knew that boys are monsters. But doing my best to mentor my all-powerful, all-woman team, The Taste really brought that message home. I like my team a lot. I miss them. Also, men kind of suck.

We like men a lot, too. But they suck. Oh, thank you, Anthony Bourdain, for understanding our women brains — even if you are a man who, by extension of your own logic, “kind of sucks.” Why aren’t you friends with Seth MacFarlane, already?

Still, to all our readers who occasionally wonder if Bourdain jumped over a shark, we say that one thing is a fact: Malarkey is a man who always sucks.