WATCH: The Most Intense Moments (And One Sweet One) In Anthony Bourdain’s Trip To Libya 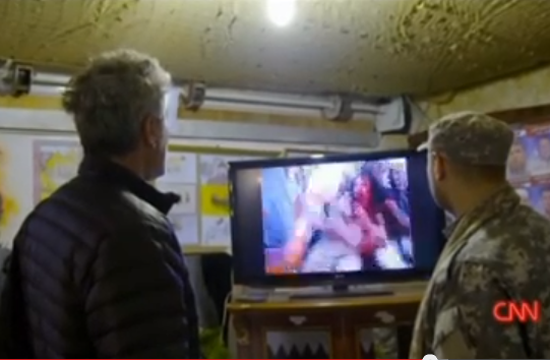 Jarringly cut in between happy, cheerful segments of the Libyan people enjoying their long-lost freedom (with fireworks, barbecues, and pieces of KFC knockoff chicken) are sober reminders of the country’s current instability, as well as the blood spilled in the fight against the Gadaffi regime — the only regime in the world, Bourdain notes, to legitimately deserve the name “the bad guys.”

First, during a trip to the ruins of the Gadaffi compound, the Zero Point Zero team suddenly found themselves surrounded by an unknown militia — one of dozens currently fighting for control of Libya — who claim that Gadaffi’s ruins are in their territory:

A trip to a Misrata war museum starts off fairly comical — ooh, guns! Haha, Gadaffi’s beauty products! Let’s wipe our feet on a rug made of his face! — until Bourdain and his guide walk into the Hall of Martyrs. Hundreds of thousands of photos of people killed in the war — women, children, and a dead infant giving the peace sign — line the walls, illuminated by footage of a bloody Gadaffi screaming in the last moments of his life. “We still have the t-shirt with the blood on it,” the guide in camo smiles grimly.

Warning: the following footage gets graphic.

But to counter the idea that Libya’s still irrevocably scarred by memories of the revolution, here’s extended footage of the beautiful moment where Bourdain met a troop of Libyan boy scouts in the ruins of Leptis Magna: