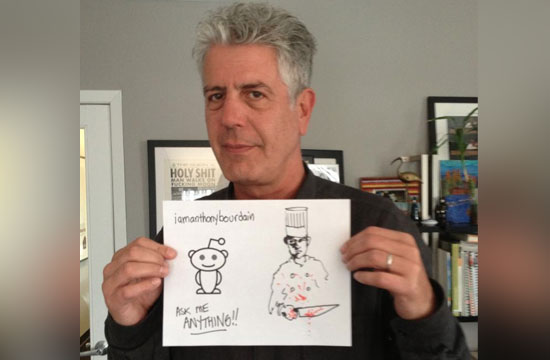 Yesterday’s Reddit AMA with Anthony Bourdain was far different from the first time he’d come around the internet hub. Whereas two years ago he simply video-taped his answers and plastered a few on YouTube, this time he sat down, much like an Obama, and wrote answers to any fucked-up question the internet asked of him. Here’s some of his realest and/or most hilarious answers:

Do you ever find yourself wishing you we’re back in the kitchen, sweating over a range, working through a dinner rush?

Hell no! I had 30 years of that. I like farting through hotel sheets!

You seem to really hate Paula Deen, but do you like southern food that is not prepared by her? What is your favorite dish if you do?

The South is where the greatest American traditional food comes from. It’s the cradle of American gastronomy. I reject the notion that what Paula was selling is traditional Southern food. Cheeseburger on a Krispie Kreme bun? Nobody’s Grandma I ever heard of EVER made that shit.

What was the worst hangover you ever had on No Reservations?

How did you end up with an all beautiful women team in The Taste?

Picked them absolutely blind. I had NO idea. There has been ZERO interference or suggestions from producers on the show as far as judging or picking teams. ZERO. I would be happy to take a polygraph on any suggestions to the contrary.

Why did you steal Guy Fieri’s Lamborghini and then frame a teenager?

I’m from San Francisco and live in Amsterdam. You hated Amsterdam didn’t you? (The food here sucks.)

Amsterdam may not be the first place I think of as a food destination but I liked it fine! #420

What was your worst incident of food poisoning while traveling for No Reservations?

Liberia. I was crawling around leaking in all directions for two days.

Hey Anthony what was the single most horrifying experience you went through while doing No Reservations?

I once hallucinated concentric circles of scotty dogs in the sky. Not good.

What cars have you owned/currently own, and which of them were/are your favorite(s)?

I just bought my very first car of my whole life. A family car with child seat and plenty of cargo space. I love it like a teenager. It’s not douchey.

Why do you wear so much makeup on the show taste? Are they trying to make you look Jersey orange on purpose?

Yeah. A real change for me — as I’ve never had to wear it. It’s freaky. And the longer you shoot, the more layers they pile on to counteract the sweat. I’m told that on network lighting, that without make-up, everybody looks like Andy Rooney. In my defense? That fucking tan is all mine — and honestly acquired! But point taken. We all look so smooth!

What is something you never want to taste again?