A Just-In-Case Guide To The Bevpocalypse 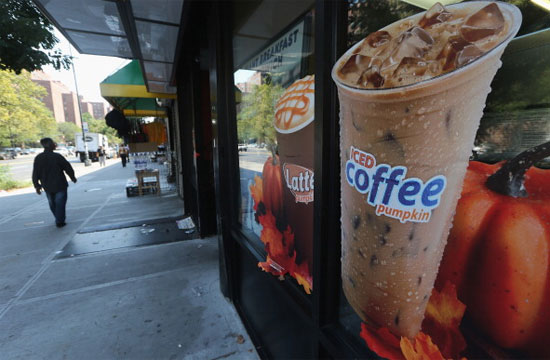 Today was supposed to be the last day that New Yorkers could purchase sugary beverages over 16 oz, thanks to Michael Bloomberg’s horrible drinks ban — until it was overturned by an NYC judge at the very last minute. However, the mayor’s office will challenge his ruling, meaning that our current way of life is still imperiled. Should Bloomberg get his way, a societal paradigm shift is inevitable, as if Manhattan were overrun by zombies, or as if we were all dinosaurs and Mayor Bloomberg was a meteor.

However, this doesn’t have to be the end of the world as you know it. Indeed, with our tips, you can enter a brave new world of smaller drinks, ingenious beverage hacks, and  — and, on very rare occasions, quenching your thirst with the sweet nectars of corn.

Much like bootleggers during Prohibition, who made their own moonshine in the mountains and cabernet in their bathtubs, you too can produce as much soda, coffee, and frappucino at home, fulfilling your diabetic tummy’s desires. For instance, here’s a few links to soda recipes— and, once you look at the sheer amount of work it takes to make cola syrup without cocaine, you’ll suck it up and nurse a 16 oz Diet Coke. (Also: industrial-sized jars of aspartame are hard to find.)

Outside the broken city of New York lies a vast world of sugary liquid beverages, free for the taking! One such goldmine is called “Costco’s,” where one may purchase a churro, a large slice of pizza, a footlong hot dog, and a 36 oz fountain soda for less than $10. Hide this in your daughter’s diaper bag, and once back inside the city, you can feast for a week. (Big Gulp Slurpees, however, are a rarer and perishable treat.)

Drink This Not That

Black coffee. Coffee with a lot of milk. Diet Coke. Diet Pepsi. Seltzer. Okay, we’re sorry, none of these are as good as the real thing. (Though we will accept that Diet Coke is the lifeblood of New York City.)

Current regulations prevent food and beverage companies from handing out more than one 16 oz sugary beverage at a time, so here’s a tip we learned from our immigrant mothers: grab a bunch of friends, purchase one beverage per person, then pool all the beverages together so that one woman may feed her family for the week. Repeat the next day, at a different Starbucks.

Your streets may be filled with Bloombergistas, recognizable by their Lululemon yoga pants and their kale juices. Though they are not armed, they are indeed dangerous — that is, if you’re allergic to Looks Of Judgement and Pronouncements Of Shame. Disguise your beverages by toting them in Nalgene water bottles, but avoid Jamba Juice disguises at all costs. Jamba Juice is the sign of the health poseur.

Crashed from their sugar/caffeine highs, they’ll be wandering, brain-dead, throughout the streets of the city. Occasionally, when they get a rush of their favorite beverage, they’ll bolt and run dangerously fast…before slowing and shambling back into their zombie state. The solution: stock up on Diet Coke, use them as grenades or distracting baubles, and you should escape with your dignity intact.

Life will be very different after the Bevpocalypse. Expect things like weight loss, lethargy, a loss of life’s purpose, increased lung capacity, longer life span, mutant children eating fruit, and the dissolution of the freedom of choice that once was a hallmark of the free market and a democracy that NO LONGER EXISTS.

Not A New Yorker?

Too bad. If you live in any fairly liberal enclave, prepare for your own government leader to try emulating Bloomberg, because it’s not every day a billionaire liberal politician happens. If you live anywhere else, cling to to 2-liter bottles and corn syrup-sweetened beverages; cling for dear life. You may suffer health problems for doing so, but at least you did it because you were free to choose.