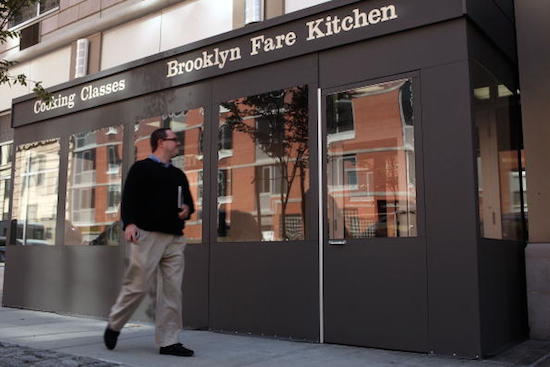 It’s a flashy headline, for sure: three-starred Michelin restaurant, Brooklyn Fare, was served a class-action lawsuit yesterday by several of his servers, a sous chef, and one prep cook. While the lawsuit alleges wage theft, the more troubling allegations include some extreme discrimination and bias towards Asian customers (and Upper West Siders, of all things, but let’s not focus on that). And it’s not pretty.

For his part, the owner of Brooklyn Fare, Moe Issa, issued a statement lauding his “pride in diversity of our staff” and the way customers are treated. “… We welcome everyone who comes through our doors with open arms, be it a guest, vendor, or employee, regardless of their creed, religion, ethnicity, sexual orientation, or nationality,” said Issa in the statement. “We pay all of our staff fair wages for their hours worked as well as gratuity in accordance to the law.”

Nevertheless, the alleged instances of racism by Ramirez — demanding that Asian customers be sat in the back of the tasting counter, referring to Asians as “sh*it people,” giving inferior cuts of meat to Asian customers — have set off major alarms for Asian chefs and restauranteurs, who are not. having. it.

Peeps tryn get my views on dis BK Fare dude.All I can say is fuk him if it's true&if Ubeen a minority eatin in restrnts dis ain't nothin new

@BrooklynFare1 http://t.co/pbJRePumoe So Asians are "welcomed," but may be seated at the "back of the bus," served shitty meat?#coolstorybro

At least Eddie Huang takes it with some humor (which in the past, he hasn’t). Kristen Kish, however, does not.

sir you're a shit head and come to think of it..I was at the most outward part of the "u" shaped table when I dined http://t.co/uPzUz2bDZg

Then, we found a much more detailed account from a food blogger, Shelly in Real Life. Shelly dined at Brooklyn Fare a little more than year ago, and describes what happens when she found a sandy intestinal tract in her langoustine course:

Then our 10th course came, it was a Langoustine with Shitake Dashi Broth, Shitake Ravioli, and Line Caught Squid from Japan. I quickly brought my attention to the beautiful langoustine staring at me. I cut it to enjoy my first bite and… crunch. Then… more crunch. I realized I was eating multiple bites of sand, so I asked J …. Umm… is there sand in yours? He said he had a tad in his, but not as bad as my experience. As I continued to chew on sand for what felt like days to me – I flipped over my remaining piece of langoustine and dissected it to find a huge intestinal tract (read: poo & sand) still attached to it.

Great, my langoustine was a huge sand eater, and it never got cleaned out of him before it got served to me. This was really off-putting for obvious reasons and then my magic moment happens. Right as I discovered this, Chef Ramirez decided to make his rounds to us and asked what we thought of the meal. Well, what was I going to do? I had to tell him that I found (a ton of) sand in my langoustine, and even had the huge intestinal tract on my plate to show him. He quickly flipped a switch and told me that he’d “take care of it”. …

Moments later, Chef Ramirez came back to me, clearly disgruntled, and told me that they looked at my dish and was sorry for what happened. He ensured me that he had tried 4-5 langoustines before serving this to me, and all the rest of them were fine. That this never happens, and quickly left again.

I was taken back by his demeanor, but I tried to understand where the mood came from. I could only imagine all the emotions running through him as he was trying to figure out what happened, but when I heard that he would “take care of it”, I figured at the very least I would get another piece of langoustine to replace the one I barely ate.

Instead, all I got during the rest of the night from Chef Ramirez was a complete silent treatment as he continued to make conversation with all the other guests except for us. As the night progressed, I regretted telling him about the sand in my langoustine because I really wanted to chat with him, learn about his visions as a chef, what his thoughts were for the new Chef’s Table opening in Manhattan, etc etc. So many questions to ask, but we were just completely ignored for the rest of the night.

Shelly then updated her article with the recent allegations: “Maybe that explains why he didn’t really give a shit when I openly told him there was sand in my langoustine – something that would not be tolerated at any other three michelin star establishment.”

Grubstreet explains why Ramirez should address the allegations head-on, to avoid media speculation. Or better yet, when proclaimed chefs and food writers begin to speculate and turn on a Michelin-starred restaurant and chef.