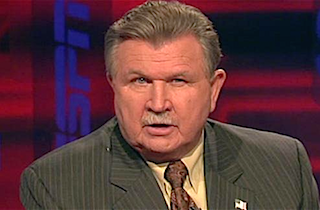 Former Chicago Bears coach Mike Ditka has never been shy about expressing his disdain for “political correct idiots” and when the Chicago Sun-Times gave him the opportunity to weigh in on this past week’s “Hands Up, Don’t Shoot” protest by a handful of St. Louis Rams players, he did not hold back.

“It’s a shame this thing has come to this,” Ditka told the Chicago Sun-Times when asked about the situation in Ferguson, Missouri. “The shame of it is, I’m not sure they care about Michael Brown or anything else. This was a reason to protest and to go out and loot. Is this the way to celebrate the memory of Michael Brown? Is this an excuse to be lawless? Somebody has to tell me that. I don’t understand it.

“I understand what the Rams’ take on this was,” he continued. “I’m embarrassed for the players more than anything. They want to take a political stand on this? Well, there are a lot of other things that have happened in our society that people have not stood up and disagreed about.”

After admitting that he wasn’t in Ferguson and did not know what happened, Ditka said there is one thing he does know: “If we dismantle and limit the power of our policemen any more than we have already, then we’re going to have a lot of problems in this country.”

“What do you do if someone pulls a gun on you or is robbing a store and you stop them?” he asked. “I don’t want to hear about this hands-up crap. That’s not what happened. I don’t know exactly what did happen, but I know that’s not what happened. This policeman’s life is ruined. Why? Because we have to break somebody down. Because we have to even out the game. I don’t know. I don’t get it. Maybe I’m just old fashioned.”

Watch video of the Rams protest below, via CBS Sports: