WATCH: Buddy Valastro And Rachael Ray Get Into Frosting Fight 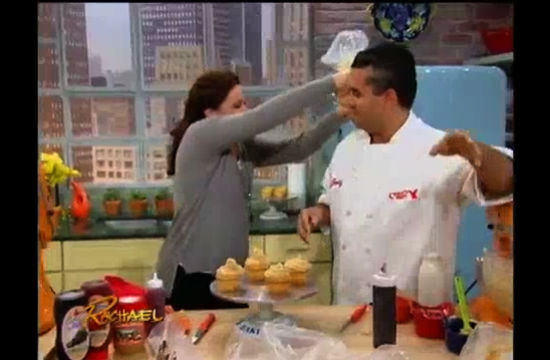 We love when Buddy Valastro visits Rachael Ray, only to mercilessly berate her baking skills on her own television show, so we knew it was only a matter of time before Rachael snapped. Today’s episode was that show. Buddy was demoing his signature PB&J cupcakes, when he accidentally squirted a schmear of frosting down Rachel’s leg and onto her (gasp!) suede boots.

On the whole, however, the most offensive part of this clip is Buddy’s tip for eating a cupcake “Hoboken Style,” ie., tearing off the bottom and placing it on top of the frosting for a macaroon-esque cupcake sandwich. First of all, this tip does not belong to Buddy; it belongs to former fat kids everywhere. Because as all former fat kids know, the cupcake sandwich is the best way to ensure proportional bites of cake to frosting, as well as the best way to keep frosting off the tip of your nose when sinking your teeth into a four inch thick layer. There is no second of all, except perhaps for the fact that claiming anything good originated in Hoboken is also offensive.