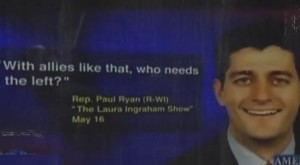 It remains to be seen if Republican presidential candidate Mitt Romney‘s selection of Rep. Paul Ryan and his controversial budget plan will buoy him to victory, but one thing is certain: now that former House Speaker Newt Gingrich is Romney’s chief Welfare Queen Attack Dog, it won’t do for people to see Gingrich attacking Paul Ryan‘s plan as “radical” and “extreme.”

That’s exactly what Gingrich did, though, and Mitt Romney attacked him for it in an ad that’s been scrubbed from his YouTube account, but preserved for posterity by Mediaite:

The Romney campaign has merrily enlisted the aid of former Speaker of the House Newt Gingrich to spread lies about President Obama and welfare, but just a few months ago, they were taking aim at Gingrich for daring to speak out against Paul Ryan‘s budget, which Gingrich told Meet The Press‘ David Gregory was “right-wing social engineering,” adding that “I don’t think imposing radical change from the right or the left is a very good way for a free society to operate.”

That moment of honesty brought down the collective Wrath of Con(servatives everywhere) onto Gingrich, and he was forced to offer the most surreal retraction in history, insisting that anyone who quoted what he said was a liar.

Of all the attack ads Romney produced during the Republican primary, this one has the potential to damage him the most, because Romney and Ryan will need to convince independent voters that opposition to the Ryan plan, or the Ryan/Romney Frankenplan, is just liberal hand-wringing. If even Newt Gingrich called it radical, that’s a tough case to make.

Now that they’re all on the same side, everyone would really like to pretend that Gingrich never had that moment of destructive honesty (something Gingrich is still prone to), but the ad is also a reminder that the same Mitt Romney who now complains about ads that his opponent didn’t even produce has been putting his name on devastating attack ads for a good long time.