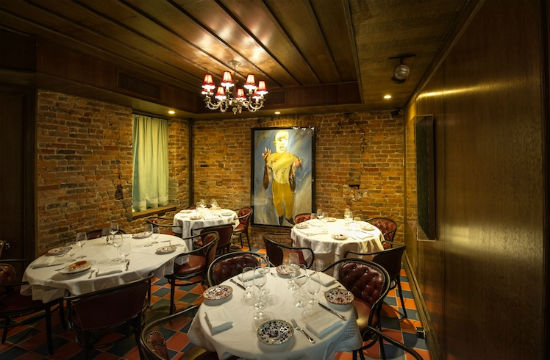 In what was an otherwise verklempt love letter to Quentin Tarantino and a pretty glowing review of Rich Torrisi and Mario Carbone’s latest vintage Italian-American red-sauce project Carbone, Pete Wells buried a sweetly feminist message to warm the cockles of our hearts.

While describing the restaurant’s kitschy, if forced, Godfather-esque atmosphere, Pete notes of the maroon-suited, bow-tied captains:

Carbone’s captains are character actors who have mastered the jokey, swaggering, slightly bossy style that was a New York specialty before waiters began to have the blandly pleasant manners of the young people who carry Bibles and ring doorbells on Saturday mornings. There is a flash of three-card monte below the surface, as these men sell you on meatballs with your pasta or promise that the lemon cheesecake is “the best you’ll ever have in your life.” They aren’t lying about the cheesecake, though.

And the most talented among them can improvise dialogue while grating creamy ricotta salata over a Caesar salad that is just as sharp with anchovies as you could wish. One night a star of romantic comedies was sharing one appetizer and one main course with her male date. When the date left the table, the captain leaned in.

Captain: I said that’s a good-looking young man you’re with.

This kind of thing is funny only if you agree to play along. And I’m not ready to play along with all of Carbone’s casting decisions: currently all the captains, typically the most highly tipped employees, are men.

Yikes. Couldn’t we hire some gaudy matriarch types to oversee? Some tarted up, big-haired young daughter-types with Jersey accents to ostensibly help run the joint? Wouldn’t that fit the theme of old-timey Italian restaurants of the ’60s and also level the playing field?

You can read the rest of Pete Wells’ review here. We’ll just be sitting over here, contemplating whether we would look like assholes if we went in just to order the cheesecake.