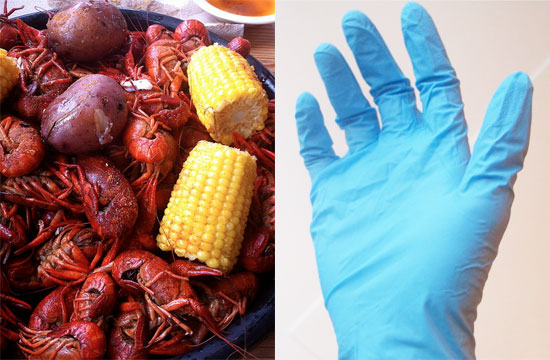 Last week, the New York Post exposed some of the most deviant, retch-inducing behavior practiced among New York’s dining elite: at The Boil, a New Orleans-themed restaurant in the Lower East Side, diners were spotted eating crawfish…while wearing rubber gloves.

And why are they wearing gloves? Because of their precious little citified hands, combined with their desperate need to wear their Saturday night outfits 4 Goin 2 Da Club afterwards:

The gloves have, in fact, turned out to be one of the restaurant’s most popular features for urbanites who want to keep their manicures clean while they munch. “Usually in LA [seafood restaurants], I end up smelling like garlic for four days, and it’s not a good look,” says Shawnie Anderson, who recently moved from Los Angeles to Chelsea.

We are not amused, and neither were quite a few people who Know Better Than That. Get ready to be schooled by Bryan Voltaggio, prissy little powder manicure-obsessed New Yorkers:

@Francis_Lam @thecajunboy we won’t stand for this in MD when it comes to crabs NO WAY!!! They would get laughed out of here!!!

Seriously, what the hell, New Yorkers? The Cajuns were boiling crawfish with a melange of pungent, offensively-colored spices and eating the little critters with their hands long before rubber was vulcanized and people started using it for pro-sanitation things like surgical gloves, Goodyear Tires and condoms. Even worse, not having your fingernails available leads to a 35% waste of crawfish meat (we guesstimate), which is a crime.

But the true offense of wearing surgical gloves while eating shellfish is that it separates the eater from the raw, visceral thrill of tearing apart an entire animal for their gustatory pleasure. Imagine yourself cracking open its abdomen with your fingernails and digging its meat out of each segment, sucking out the cooling soup of its brain from the chalice of its ripped skull, hands dripping with rich butter, mouth smeared red with slow-burning spices, while a mountain of exoskeletons grow to your side, like so many dead aliens of a foreign planet that you, victorious devourer, striding across the planet’s surface like Goya’s Colossus, have just conquered.

If you must care about how your hands smell, here’s a pro tip from years of experience: rub your hands with your leftover wedge of lemon after eating a Bucket O’ Shellfish, making sure to clean thoroughly under the nails. Not only does it leave your hands citric acid-clean and lemony fresh, it’s also a biodegradable Wet Wipe.

RELATED:
WATCH: Richard Blais Brings Some Friends To Burger Lab, Tosses Them In Hot Oil
Art Smith’s Chef’s Ball: Crawfish Pies, Bowties, And Bipartisan Fried Chicken
Rant: Only Someone From Maryland Has Any Business Talking About How To Prepare Crabs