Chris Cosentino Writes Issue Of Wolverine, Which Is Super Awesome 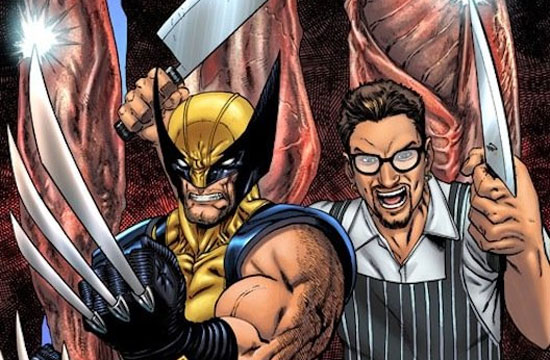 We’re gonna repress our inner comics geek for a moment so we don’t freak the fuck out, because we just heard that Chris Cosentino is writing a comic book. Even better: he’s writing an issue of Wolverine, who is essentially Chris Cosentino, but with infinitely more angst (and a skeleton made of adamantium).

In a Wired profile of the San Francisco chef, Cosentino revealed publicly that he’d been asked by Marvel Comics to write a Wolverine story incorporating his own, real-life restaurant Incanto in San Francisco, where the mutant team recently relocated. Though it was initially supposed to be a collaboration between Cosentino and his friend, Marvel writer C.B. Cebulski, scheduling differences prompted Cosentino to write it himself in one night:

“I wrote the entire comic book from midnight until 6 a.m. one night.” he says. “We’d gotten crushed in the restaurant and I was wired. I was so hyper. It was one of our busiest nights. I literally came home and I sat and I just started typing on the iPad. Then I passed out, my wife woke me up at like 6:30 after a half an hour of sleep and she was like, ‘What have you been doing?’ and I was like ‘Oh, I wrote Wolverine.'”

Though he’s tight-lipped as Logan on the plot of the issue (“You’re the 900th person who has asked me,” he chastises the reporter), it apparently involves Wolverine in Incanto’s kitchen with Cosentino, doing what they both do best: carving up animals, dealing with guts, and reveling in blood, but in a more civilized, socially acceptable manner. (Also, the villain runs a food truck, which is probably a Transformer. Different nerd universes, whatever.)

Wolverine featuring Chris Cosentino hits shelves on July 31st and we will be in line because that is how we roll.

RELATED
Comic Book Publisher Wants Everyone To Know They ‘Still Think Paula Deen Is A Role Model’
Last Call: Alain Passard, The Graphic Novel
REVIEW: Anthony Bourdain’s Get Jiro! Is Decadent And Depraved And We Loved It