Escoffier Room (A.K.A. Anthony Bourdain’s Former Hell) To Be Replaced With Bocuse Room 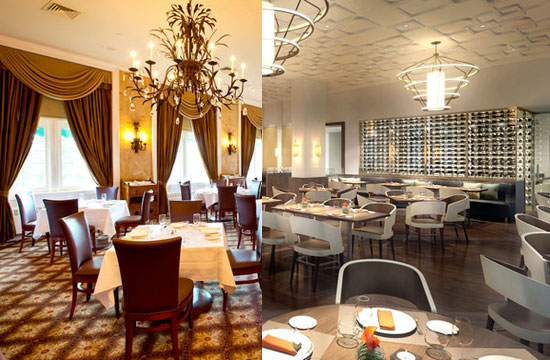 American cuisine is changing — dare we say, it’s becoming cooler, more prominent, more integral to culture — and the preeminent Culinary Institute of America in Hyde Park, NY is changing along with it. Specifically, the famed Escoffier Room, the student-run restaurant where alumni from Anthony Bourdain to Grant Achatz made their marrow bones, will soon be no more: it’s undergoing a $3 million renovation from a fussy, classically-French dining room into a sleek, modern brasserie, and the menu is being reconceptualized as well.

The New York Times reports that the new Bocuse Room, named after the paradigm-shifting French chef “who championed seasonal cuisine and pioneered the notion of the celebrated chef and owner,” is the culmination of the school’s metamorphosis into an institution that reflects the current dining revolution in America, while training its students to push it forward. (Surprisingly, the renovation will also finally bring sous vide machines into the student restaurant, which makes us go, “Whaaaaaa? Now?!” Man, it’s a good thing that this is happening.)

But the school’s famous graduates are wistfully sad to see it go. Bourdain, who immortalized the former Escoffier Room as a chef boot camp from hell in a chapter on his school experiences in Kitchen Confidential, said “I was — and remain — very sentimental about those recipes and dishes. [The school] should have said goodbye to the Escoffier room a long time ago, [and yet] I hate to think of a world where there isn’t Escoffier cuisine served without irony.”

And Lincoln Ristorante executive chef Jonathan Benno, who had an “eye-opening” experience in the “E Room” when he first cooked frogs’ legs there, felt that it was the restaurant’s time to go. “C.I.A. has to stay ahead of the curve, but it’s one more little piece of history, and of our culture as chefs, that is being put on a shelf in a library.”