Fresh Off The Boat Recap, Episode 5 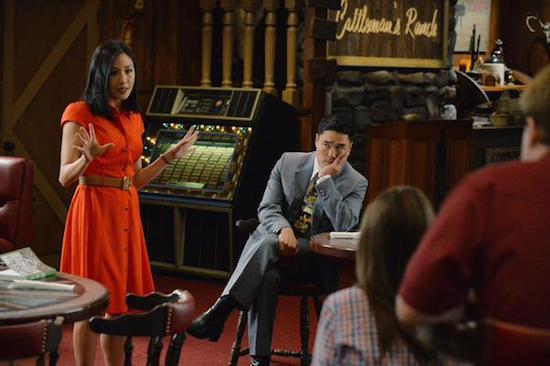 Five shows in and FOTB is now on Tuesdays at 8 p.m., yikes. Tough night and tough time slot — it’s like ABC wants this show to fail. Beyond Eddie Huang’s rant, most reviews have been positive and the ratings have been not half-bad. But having to go up against two versions of NCIS, The Flash, the last season of Parks and Recreation (oh wait, nobody really watches that either) — still, tough night. Like Eddie’s character, I’m hanging in. He wants to fit in, I want to be entertained with laughs. Let’s see which one of us gets what we want first.

Mom’s not dealing so well with all her free time: she watches the nightly news and its fear-mongering is taking over her life, and therefore everyone else’s lives around her. Pedophiles! Date Rape! Deadly Couch Chemicals! Sexual Harassment at Work! “Movie theaters are a hotbed of disease, unless there’s a Denzel movie.” OK, I’m onboard with that one.

The restaurant is taking off, at least, so Mom thinks it’s a good idea to hold a sexual harassment seminar for the staff, because, you know, nightly news. Things go horribly awry as Mom is her own hotbed of harassment. And just as she starts a joke — “a German broad with big honkers walks into a bar…” — Dad stops her. Too bad, I really wanted to hear the end of that joke.

Eddie can’t go to the sleepover but gets to have it at his house. He devises a plan to get everyone over, even though his bedroom doesn’t have a “little fridge of Hi-C Ecto Cooler. The official drink of Slimer!” I remember having that drink: green, sweet and tasted much better with vodka. He tells his friends he’s got a dirty movie. Eyes bulge, mouths open and everyone wants to go (because who wouldn’t?). “To make some friends, he’s got to break some rules” and tries to steal one from the video store but is caught by the mean tall blond kid with the cracking voice. The kid knew Eddie didn’t have a movie and just wants to watch him Crash and Burn. Yeah, the kind of kid you just want to smack—every time he talks.

After Mom’s failed attempt, Dad hires a professional seminar leader, Dusty Nugget. Sounded like a stripper name to me, but he turned out to be a balding bearded guy — disappointed. He’s a former serial sexual harasser who’s working for the good guy now. And he’s got props! And he’s gonna be here all week! Please tip your waiters! No One is Fond of Fondling should not be on a visor; it should be a shirt from like Urban Outfitters.

The movie causes a stink at school as all the boys start using the lines on the girls. Yes I get a laugh or two out of that, but not in that creepy way. Okay, maybe just a little. Because of it, the school decides parents need to go over the birds and bees with their kids and give out a handy guide called “Flowers and Watering Cans” — get it? You know, stamens and stuff. Dad ends up giving Eddie a montage talk of nonsense about sex that are supposed to be funny but I think they “missed the boat.”

Mom finds out Dad didn’t cover date rape and then attacks Eddie with a stuffed bunny and “No means No, respect girls — nightly news!” Dad tries to get Mom to apologize but she doesn’t think she has to say sorry to him. “I gave birth to him. Life is worth a thousand sorrys.” Wow, uplifting way to end a comedy with date rape and mom guilt. I’m busting a gut here.

Trying to fit in is the mantra of this show. You can tell, because it’s what every episode is about. Like a hammer to the head. It really is like all the other comedies out there (on ABC). Just with Asians.