INTERVIEW: Ilan Hall on How a Goofy, Late-Night Game Turned into A TV Show 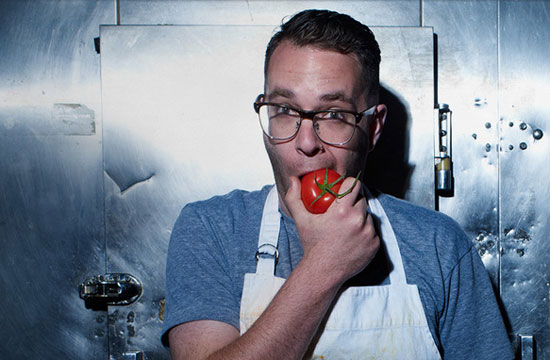 Despite a few delays and Jamie Oliver taking the name of his competition (quite by accident), Top Chef winner and LA-based Ilan Hall will soon premiere his new underground cooking competition, Knife Fight, next Tuesday night on the Esquire Network. After watching the premiere — which involves a lot of close-ups of people screaming at two chefs working in a cramped, real-world restaurant kitchen — we spoke with the owner of The Gorbals about why his show is more raw, more gutsy, and more unpolished than the other competitions out there. (Hint: Drew Barrymore might be one reason.)

The Braiser: So tell us what this show is about.

Ilan Hall: It’s just about having fun. I mean, it started out very tiny, just me and a bunch of cook friends. It really started out at the end of the night when I was in New York, and when we would clean [up at the end of the night] we would have left over mise en place or something…And then we would just compete and then a server would taste our creations usually, a expediter, sometimes a manager would taste this —  even though we were on the clock, he wouldn’t say anything to us about it. But of course, we’d do what we wanted.

And then it sort of became something in my head, something bigger that I wanted to do on a larger scale, but had never had the opportunity to do until I opened my restaurant. And so we just started doing it [at The Gorbals], first with just the cooks in my restaurant. I would go get my sous chef, we’d play around and have fun with it, and then it just…we were doing it, the chefs were getting involved. We’d do it when we would close the restaurant or when we started cleaning up when it wasn’t busy…the thing is, I’m competitive but always in a fun way, never in a life or death way. And I kind of transferred that into this.

So how did it get out of the kitchen and onto the Esquire Network?

A friend of mine met briefly with this guy that was a director and he became a friend of mine. And he was looking for show ideas to pitch, and he had an idea that he wanted to do with me and nothing really happened with it. I wasn’t really hugely interested in getting into television — I was running a restaurant, I’m a father, and I just didn’t really have the time or anything for it. But I’m like ‘Well, we’re doing this thing and you can come shoot it if you want’. And then that’s when we did this little reel. We got John Travolta to judge, and a bunch of friends of mine just invited more people… cause its usually just people in the restaurant, regulars, and the staff at the end of the night. But then he just shot us doing one — and then, I’m standing here right now, on television.

That’s one thing I noticed about the show — how natural and organic it felt. We watch a lot of food competition shows, and they always have a very glossy, formulaic feeling — but this really just feels like people cooking in a kitchen.

That’s the whole thing I’ve been working towards. That [glossy] element — that was the one element that I wasn’t doing, because we weren’t making [the game] for television, and we were just having fun with it. And it’s cool, because I haven’t had [that much fun] since being in New York, when all of my friends were so close together, and you end up socializing with other chefs since we’re all out there and seeing each other late at night. In LA, I feel like it’s difficult to have that camaraderie. LA’s such a spread-out city, but it’s still a tight-knit community even though the distance is much greater.

Speaking of underground competitions, was Fight Club a direct influence? There’s a liiiiittle hint of that in the show.

Actually, when we were doing it [in the kitchen], we were calling it “Food Fight Club,” but then what happened was that it was the name of another TV show [Ed: Yeah, Jamie Oliver stole it. Thanks, Jamiez.] We couldn’t re-market that because it was a name that was taken already.

I’m fine with it, actually. I think the name is a bit better.

Also, I noticed something unusual in your credits. How the hell is Drew Barrymore one of your executive producers?

[The executive producer who shot the sizzle reel], he had a relationship with Flower Films and he’s been working with them for years. [Drew] owns the company and she changed everything. She loved it, and agreed with it, and wanted to come down and it just came together like that. There’s nothing bad about that partnership.

There’s nothing bad about it, dude! I just remember seeing the credits and going “…whaaaaat? She’s involved? What?”

Yeah, she produces a lot of things that you wouldn’t expect — they’ve been doing Tough Love for six seasons. They’ve been wanting to branch out to other things, but they’re not a gigantic company, so they wanted to do things that they wanted to be a part of. They’ve been incredible — helping us with connections and stuff. That’s pretty much it. She’s really down to earth and cool.

Will she ever make an appearance on the show?

Yeah, she’s a judge on the finale.

Okay, this is a question that plumbs the depths of your imagination: the lineup for Knife Fight is full of chefs who still work at their restaurants, often on the line. What glossy TV chef would you like to throw into your kitchen at The Gorbals, just to see if he or she could survive?

I’d love to see two huge guys go up against each other — but I dunno. People who have the basic skills, you know? Not people who are glorified because they’re on television. Oh! I’d love to have Wolfgang Puck. No matter what anyone says, he’s still a chef. He came from the real world, and through business, became incredibly successful, but still: whenever he’s at an event, and he’s there, and catering it, he’s in charge of everything that’s going on. Maybe Wolfgang Puck versus [Matsuhisa] Nobu? I don’t know if Nobu’s a “glossy TV chef,” though.

Whoa. You want to Throwdown™ With Bobby Flay?

Yeah, I don’t think it would be much of a “throwdown,” but I’d like to beat him. He’s incredibly competitive, and on his show, he always goes through weird challenges, so if he loses, it makes him look humble. But I actually challenged him years ago, when I was at the South Beach Wine and Food Festival and I saw him on the street. He probably thought that I was some drunk guy yelling at him, but I really wanted to. I tried to go on Iron Chef to challenge him, but it never panned out.

I think it would be more interesting to see him on your show, to be honest.

Oh, I don’t think it will happen. He’s definitely on contract with That Other Network, but I’d love to get him out of his element.

That’s really what Knife Fight is, though — everyone has a good time, but it takes them out of their element. They find that the thing that throws them off is the fact that they’re not in a kitchen they feel comfortable with. It’s a real working kitchen that I don’t have millions of dollars behind, so things break, things are old, the way you close the oven is really tricky. One of the first episodes we shot, the hood just stopped working. We couldn’t even use some of the equipment. But these situations just happen. No one planned it, it just happened, because that’s how it goes.