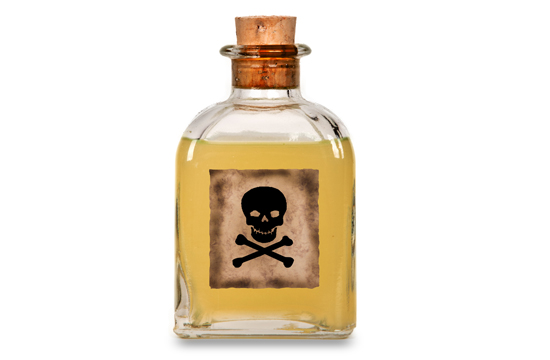 Huffington Post A chef in the Inner Mongolia Autonomous Region of China mistakingly added pesticide to a lunch dish, killing one person and injuring several others who partook of the poisoned plate. While this is tragic news, we can’t stop our brains from going all “Who’s On First” with phrases like, “I said PESTO!” We’re terrible. Moving on.

Grub Street: A restaurant in Delaware — called Padi, for your boycotting archive — has been blasted for tweet-shaming low tippers using a whole slew of racist epithets that we don’t want to reprint. The offending crew of course denied any wrong-doing and had the sliver of sense to take down their twitter page, but not before Grubstreet got ahold of some choice quotes. We’ve got two bits of advice. For restaurants: This is how you shame customers. For customers: Maryland. That’s it.

Food Republic: Apparently one man single-handedly trained thousands of bartenders across the nation. How many drinks must we have imbibed thanks to Dale DeGroff, known as “King Cocktail”? The answer: thousands. Single-handedly. He opened Blackbird in New York City, took Audrey Saunders under his wing — who went on to open Pegu Club — and gave Sasha Petraske his first cocktail book, inspiring him to open Milk & Honey. We should all know and revere DeGroff, as we’ve been drinking in his brilliance all this time.

Zagat: Animal rights activists hacked into the Hudson Valley Fois Gras website and released contact information for the shameful, terrible, buyers of delicious liver. A California-based chef named Amar Santana has been a target of plant-killer harassment since the breach and told the site, “we are talking about ducks. They are raised to be eaten.” Also, “you are telling me it is OK to blast personal information like that online? That is more illegal than anything else.” True point, Amar, and do you have any tables available for dinner?

Bon Appetit: Finally. A definitive answer on whether chocolate is considered healthy or not by the science community. Not that their silly facts will at all change our frequent binges on the stuff, either way.