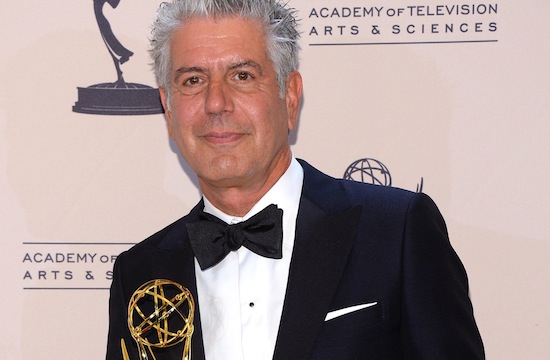 Like nerding out about food TV? So does Anthony Bourdain and ESPN writer Andy Greenwald, which makes this podcast an extremely rare opportunity to hear what Bourdain really thinks about all this food TV hubbub. (Just kidding, we always know how Bourdain feels about food TV.)

Still doesn’t make Bourdain’s views on the whole Food Network she-bang and the current state of TV any less entertaining. When Greenwald commented on the two very different skill sets of television and cooking, Bourdain chimed in:

“That’s the central ironies of celebrity chef-dom, that of all the people in the world that we now require communications skills of, we’ve chosen the least qualified… [These are] the people who chose their profession or moved towards cooking because they sensed in themselves some awkwardness, or difficulty communicating in conventional means. … You wouldn’t have seen it coming, but now communication is an essential part of running any restaurant at a certain price point. You have to be able to talk about your food in a compelling way.”

Then, when Greenwald talks about the food shows that really have nothing to do with food, but more about “appetite — really intense hunger that certain individuals have for fame greatness,” Bourdain also had plenty to say. (We assume he was talking just a tiny, tiny bit about The Taste, after all.)

“[You’ll] find this entire strata of our population who are basically reality show contestants. You try to find someone that isn’t totally damaged goods… these people who show up, they’ve got other reality shows in their background. They’re not thinking of what they’re cookng, they’re thinking it ‘Will set me up for Millionaire Matchmaker?’ They see being on tv as the end-all. There are a lot of people who are famous for just being on TV. … It’s the entire Kardashian business model, and it’s a very successful one.”

And then Greenwald and Bourdain got into the Food Network Star.

“It’s so honest — it’s so painfully, deeply, horrifyingly honest. The raw cynicism of it … They’re being judged on their likeability their potential cue rating, their back story, their ability to communicate in food, and no one even pretends to cares…

I have to be diplotmatic about this, but it would not be unreasonable to suspect, that possibly a friend of mine had a meeting with a food related network and he walked in the door, and the assembled executive said to him, ‘I hope you’re not here to pitch anything smart, because we’re not interested. I respect you, but we’re not interested in that right now. We’re into shows with pupepets” — puppets being industry speak for contestants. … ‘If you’re even thinking about anything smart or intelligent, we’re not going to waste your time. That’s not what we do.’ That’s everybody’s game now.”

Still, Bourdain said he knows not everyone can be as fortunate as him.

I’ve had a very, very very unusual time on TV. The amount of freedom i have to make the kind of show i make, to tell the stories I tell, the freedom to go anywhere I want… that’s what I’ve enjoyed my entire television career. Anytime there has been interference i’ve walked away, but I understand how rare of an arrangement that is.”

You can catch Bourdain’s full thoughts on food TV, as well as his on foray into TV, but we think his gems on holidays are just as hilarious. (The podcast was recorded in between Bourdain’s trip to India and Thanksgiving, but we think it bares just as much for Christmas, too.)

“I’m pathetically pathological in the way I embrace the holidays … I attack my responsibility as Daddy with a fervor that’s a litttle off-putting… I’m a scary Ina Garten. I write down my menus, i plan as if i’m taking the beach of Normandy. “Happy family! We’re normal! We’re going ot have a normal thanksgiving!” It’s something a little creepy about it.”

Kind of cute to see Bourdain in full-on Dad mode.