Next Iron Chef: Redemption Line Up

Next Iron Chef: Redemption Line-Up Announced: Which Top Chefs Made The Cut? 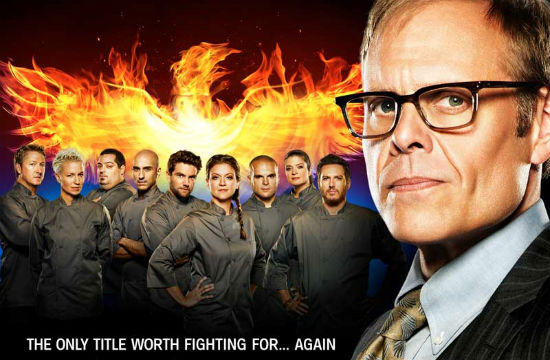 We’re only ever so slightly surprised that Food Network imported some Top Chefs from that other network with that other huge chef competition to take part in season five of Next Iron Chef, dubbed Next Iron Chef: Redemption. This season, runners up from previous seasons shall return to chase the elusive title and join The Chairman’s team alongside such Iron Chefs as Bobby Flay, Cat Cora, Michael Symon, Marc Forgione, Jose Garces, Masaharu Morimoto, and Geoffrey Zakarian.

Also, if you’ve had an Alton Brown/bow tie-shaped hole in your heart since Food Network Star wrapped up, the return of Next Iron Chef means Alton will resume his hosting duties and grace your screens once more.

Alright, we’ll cut to the chase. The Next Iron Chef competitors returning for redemption are:

As well as first time competitors:

Yes, you read that correctly. Wolverine is back.

The final slot will be filled with a special FoodNetwork.com web exclusive competition between returning Next Iron Chef runners-up Duskie Estes and Robert Trevino, and newcomers Lee Anne Wong and Madison Cowan

The new series kicks off November 5th (whoa, how close is Thanksgiving, you guys?), and a short eight episodes later, Kitchen Stadium will have a new Iron Chef. (And if it’s Wolverine, we’ll boycott. Although, we cannot wait to see Alex Guarnaschelli’s Marcel-directed snarkfaces.)