WATCH: Last Night’s Next Iron Chef Redemption Elimation Was The Stunner Of The Season 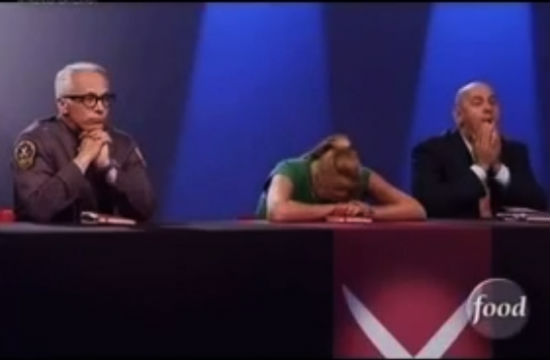 What. Just. Happened. If you didn’t tune into last night’s Next Iron Chef and don’t want to be spoiled, look away, because this is the spoiler of all spoilers. We’re really starting to wonder what the eff Spike Mendelsohn was talking about when he spilled to us that Alton Brown is sitting on a Save Card this season, because we cannot believe it wasn’t used last night.

Last night’s episode featured the dreaded auction challenge, which Faulkner and Alex Guarnaschelli competed in last season. In that contest, Chef Anne Burrell won the advantage, which was the opportunity to judge all her competitors’ dishes and determine one member of the final two. The regular judges would choose the other worst dish. Anne Burrell wound up being the judges’ least favorite, forcing her to face a contestant she pitted herself against in the secret ingredient showdown. She ultimately went home, in spite of having the advantage.

Last night? Same shit, different season. Elizabeth won the advantage and placed Nate Appleman in the bottom. She wound up cooking the judges’ least favorite dish herself, had to face him in the secret ingredient showdown, and was ultimately sent home for too much saffron. You can check out the elimination below if you want, but be warned: it’s utterly gut-wrenching. We have yet to recover. (Simon really tears up!)