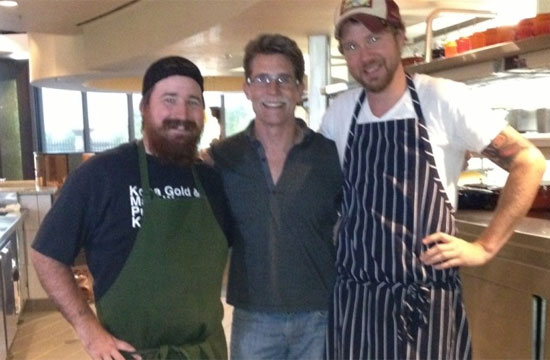 Let’s take a break from the Buttery Racism Train (thank goodness) to focus on something that’s sincerely nice and has absolutely no bigotry involved: Rick Bayless is in his home town of Oklahoma City working on a “triple pop-up” for the OKChefs tornado relief fundraiser.

We tried figuring out exactly how he planned on bringing all three of his restaurants to one event, and the below report from KFOR-TV lays it all out: this morning, he’s hosting a Xoco-themed taco lunch at the Will Rogers Theater. Later, he’s hosting a special tasting event featuring his high-end fare from President Obama’s favorite date night spot, Topolobampo. As a “capstone” event, he’s throwing a massive party back at the Will Rogers Theater with a menu from Frontera Grill.

While the Topolobampo and Frontera events are already sold out (whoops), there’s still time to grab some tacos right now for $10. And who knows — you might even peep Josh Valentine espousing the restorative properties of bacon (like he does below).

This isn’t the first OKChefs event featuring a hometown chef who Made It Big: last month, Danny Bowien came back for a dinner that raised nearly $80,000.