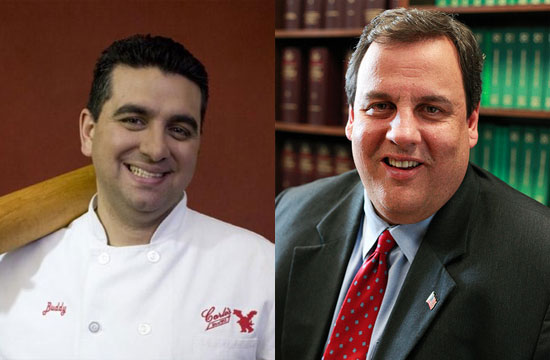 While everyone and their mothers are already debating a possible presidential run for Chris Christie in 2016, he still has to get re-elected as Governor of New Jersey this year. This is probably going to happen, and maybe, just maybe, it’s thanks to Buddy Valastro standing up for the governor’s weight problem. Ha, no, Christie’s gonna win anyways. But let’s hear what the Cake Boss has to say about it:

Valastro did stress that people need to forget about Christie’s weight, as undue attention on the matter could have an adverse effect on young people.

“It is kind of sick, the world we live in,” Valastro told HuffPost. “People talk about his weight, and we wonder why kids bully kids.”

While we doubt that Chris Christie ever gets bullied (we certainly would never want to make fun of the guy out of fear that he’s going to bellow at us until we submit), Valastro makes a nuanced, if awkward point: our nation faces an obesity epidemic with social, economic, and military repercussions, which we hope our leaders can address, both as lawmakers and as role models…but at the same time, it’s mean to make fun of Christie’s weight. Also, there’s something formidable about his Jupiterean frame…that is also dangerous for his viability, to the point where he’s even gotten lap band surgery. Ugh, what do we do.

Still, it’s rich to hear the cake guy defend a guy for being fat. Watch below: