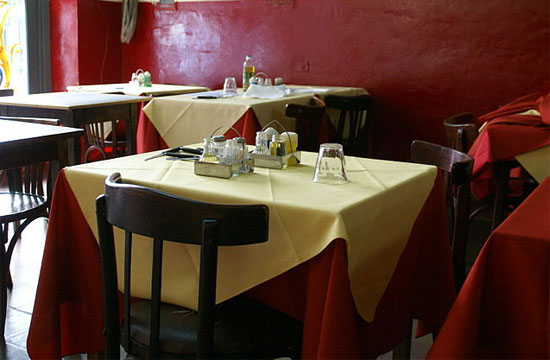 Oh boy, time to put on our microeconomic hats (which we never get to wear, and it makes us sad) to explain why it is, exactly, that people who don’t show up for their reservations are so infuriating to chefs. (So infuriationg, that restaurants have resorted to publicly shaming their guests via Twitter.) A recent study from the Wharton School of Economics shows that customers who blow off reservations end up hurting a restaurant’s bottom line. The UPenn smarties even came up with a model that shows the severity of the damage done by inconsiderate, no-show dicks.

What it all comes down to is the concept of perceived value — here, the cost of the meal from the consumer’s perspective versus the restaurant’s. When a reservation is made, customers commit at that moment to spending money to eat at a restaurant — but only because they feel like doing so at that moment. But, “as far as the restaurant is concerned,” write the folks at Knowledge@Wharton, “the meal or meals have already been sold and managers will adjust their staffing and supply levels accordingly.”

They go on to explain that the restaurant industry’s attempts at solving this conundrum, such as charging $50 for a no-show at, say, Le Bernardin, or resorting to public Twitter shame like Red Medicine famously employed, aren’t going to work. Using theoretical models, the study’s authors, Xuanming Su and Jaelynn Oh, proposed a system that “involves both punishing customers who break their reservations and rewarding those who keep them.” For instance, Le Bernardin shouldn’t just charge $50 for a no-show — they should just charge the entire cost of the tasting course dinner, in order to maximize profits and punish people who don’t keep their word.

How can smaller restaurants where guest’s spending habits fluctuate wildly deal with no-shows? Don’t take reservations at all, the authors suggest, or create a hybrid model that keeps tables open for both reservations and walk-ins (which sounds like the model currently being used at every restaurant we’ve ever heard of.)

The entire study can be found here — so restaurateurs, start plotting your Excel spreadsheets. (We know you love Excel, don’t lie.)