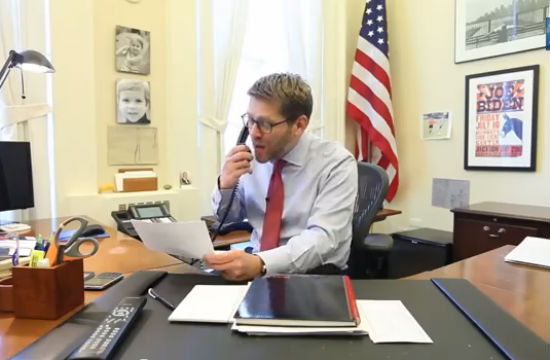 Okay, so the White House’s “Big Block of Cheese Day” has very little to do with actual cheese, except for the part where it was inspired by Andrew Jackson carting a 1400-lb block of cheese into the White House foyer for people to nibble on as he conducted an “open house” in which citizens who normally wouldn’t be able to get a meeting could come in and have the attention of the President.

But but but! This year, the REAL White House is hosting a REAL (and by “real,” we mean “virtual”) Big Block of Cheese Day! According to the video description:

“On Wednesday, January 29th, with a nod to history (and maybe the TV show the West Wing), the Obama Administration is hosting the first-ever virtual “Big Block of Cheese Day,” during which dozens of White House officials will take to social media for a day long ‘open house’ to answers questions from everyday Americans in real-time on Twitter,Facebook, Tumblr, Instagram and via Google+ Hangout.”

Also, they made this f’amazing video about it, starring Jay Carney’s silver-streaked sexbeard, Bradley “Josh ‘Lemon’ Lyman” Whitford, and Joshua “Will Bailey” Malina. It’s perfect. So perfect that we’ll bring our own cheese to the Google Hangout and not even complain about it.