Your Feel-Good Story of the Day: Tennessee Chef Stands Up to Marriage Equality 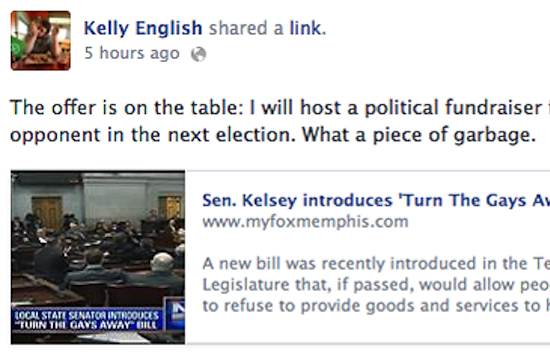 All Kelly English needs now is to team up with Chef Art Smith, and they could rule the world — one pro-love, anti-homophobic stance at a time.

News broke when English posted on his Facebook page, railing against a bill in his home state that would allow people to refuse services to gay individuals on the basis of religious beliefs. (It’s been called the “Turn Away the Gays” bill.) Said English: “The offer is on the table: I will host a political fundraiser for this guy’s opponent in the next election. What a piece of garbage.”

The good news is that after English made his remarks, the fervor from his post led to Senator Brian Kelsey to publicly drop his name from Senate Bill 2566. But of course, a new senator, Senator Mike Bell of Riceville, Tenn., is sponsoring the bill now — and the bill could still very well pass. Still, English said to local news channel WMCTV that he wouldn’t be stopped in attempting to reverse the backwards mindset of his fellow residents. “We do a lot of traveling and we get to cook in a lot of different places, and I hate that someone is making people outside of here think that that’s how people think here,” he said.

We nominate Art Smith and his team of equality advocates to help a chef brother out — let’s do the right thing in Tennessee!