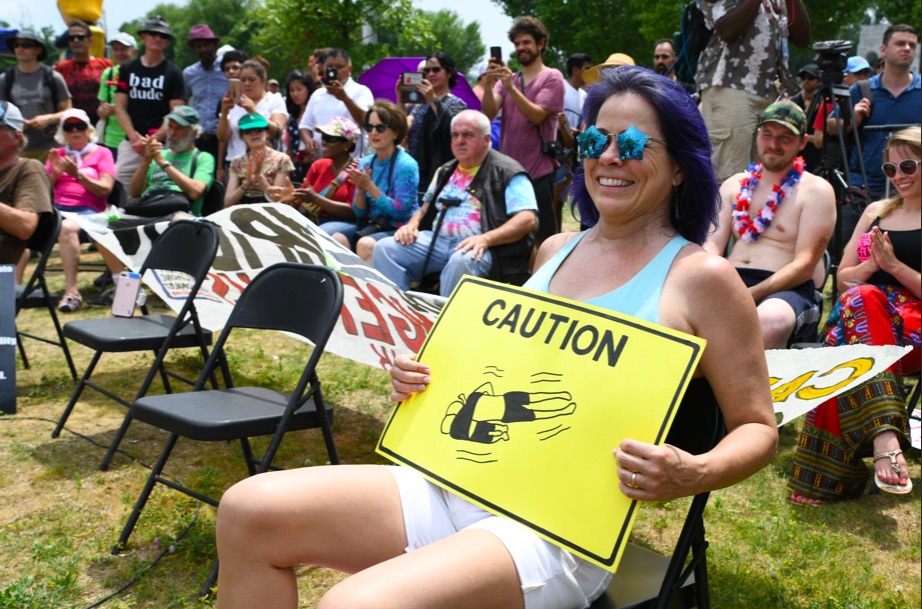 One anti-Trump protestor at Washington DC’s 4th of July celebration tried to show her opposition to the administration’s immigration policies with a mock “Caution” road sign that depicted an image of the recent, horrific drowning death of a Salvadoran father and his young daughter.

The tragic photo of the drowned man and his two year-old daughter, who were turned away from seeking asylum at the US-Mexico border and subsequently died trying to illegally cross the Rio Grande, became a national phenomenon.

The woman, whose photo was first posted on Twitter by reporter Alejandro Alvarez, from the online DC news organization WTOP, identified herself as being “Jill” from Boulder, Colorado.

Shocked by an image of a father and daughter dead on the Rio Grande, Jill from Boulder, CO shows me a dark(er) twist on border-region safety signs warning of immigrants crossing roads. #BabyTrumpBlimp pic.twitter.com/taTfI82SxS

In a subsequent interview by Alex Rubinstein of Mint Press News — also posted on Twitter — the woman said her yellow road sign mock-up was meant to convey her opposition to President Donald Trump’s immigration policies and the deadly toll they are taking on migrants who are risking their lives to seek asylum yet are being refused entry.

“This is so not America. American was made up of immigrants,” the woman said. “It makes me very sad, what’s going on. The children in the cages.”

Her protest statement wasn’t abundantly clear to many online, however. Stripped of context, the static image of her holding the sign while smiling, sitting comfortably in a folding chair, and wearing star-shaped sunglasses was quickly misinterpreted by some as an example of a Trump supporter mocking the immigrant deaths.

This woman’s sign has generated a bit of controversy on the internet today, so I decided to post my interview with her from earlier. She tells the story of the father and his 2-year-old from El Salvador who drowned trying to make it to the U.S. “It makes me really sad,” she said. pic.twitter.com/v4gs5FXUG0

Incensed at what was perceived as a sadistic joke, some Twitters quickly began passing the photo of her around and encouraged others to dox the woman’s personal details as punishment.

People are trying to have this woman doxxed because of her sign. I’m not sure how anyone can interpret it as an endorsement of Trump’s border policies – just on its face – but the least they could do is take some time to look into the matter before trying to ruin her life pic.twitter.com/QFnHFreWRg