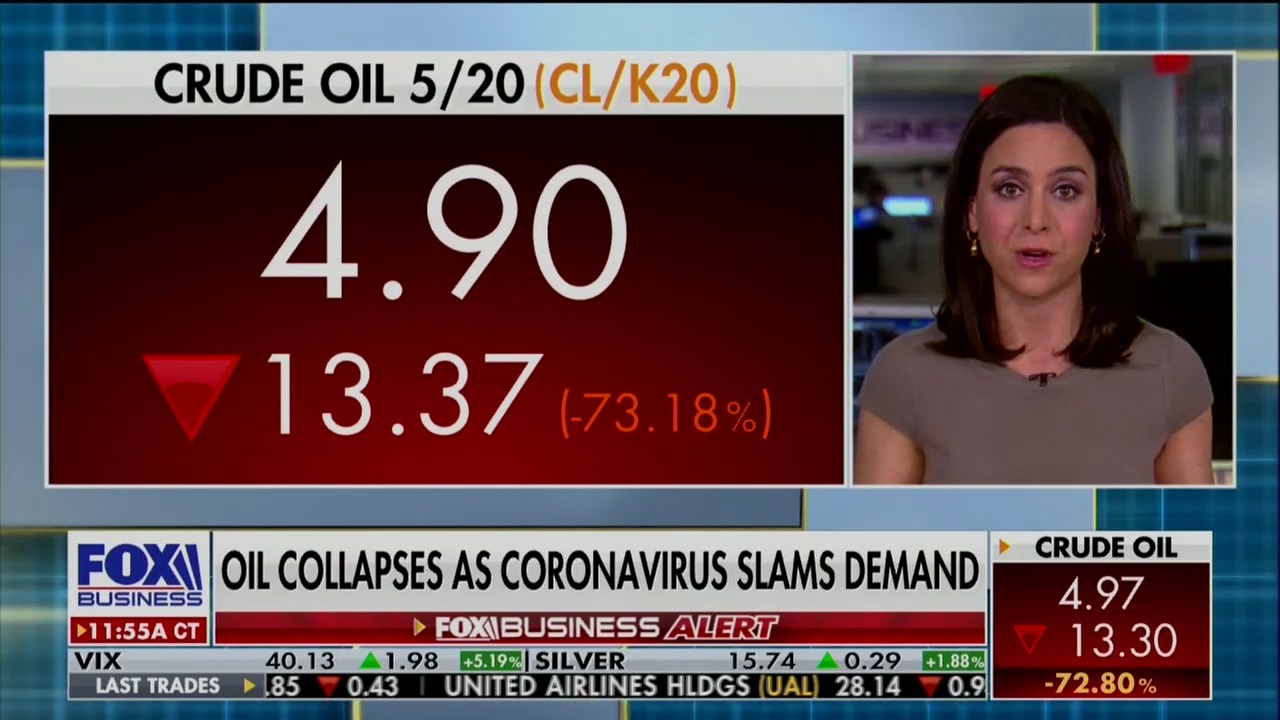 Oil prices plunged to record lows on Monday, dropping below zero for the first time in history, prompting stunning headlines to blare that the cost of a barrel of oil had dropped in a matter of minutes from $3 to $1 to… less than $0.

That’s because oil is in little demand during the lockdown, and storage facilities are filled to capacity. Oil suppliers can now either pay buyers to take the oil off their hands or shut down production, which is more expensive and can permanently damage the wells.

We reached out to Fox Business financial correspondent Jackie DeAngelis, who previously served as CNBC’s chief energy correspondent, to explain how a barrel of oil dropped from the cost of a Starbucks latte on Monday morning to less than zero by the afternoon.

What is the impact of such low oil prices on the global economy?

What the market said today is a barrel of oil is worthless because there is no demand as a result of the coronavirus lockdowns. With people staying home, losing jobs, not traveling or living life in a normal way, oil isn’t worth much. And it’s not just an issue for the United States, it’s a global issue that will impact Russia, Saudi Arabia and other oil producing countries. The impact will be catastrophic in the energy patch, it’s expected more people will lose jobs and small producers that were highly leveraged will go bankrupt. Here in the US the many wonder if the government will have to step in, to bail out oil companies. There are many unknowns at this moment, but it’s certainly historic.

To what extent do you think the plunge has to do with a power struggle between Saudi Arabia and Russia?

Russia and Saudi Arabia were cooperating, cutting production in a low price environment. But their economies depend on oil production too, so the model became unsustainable during a global crisis when demand just completely collapsed. The deal announced last week for OPEC+ to cut 20 million barrels. It’s roughly half of OPEC and Russia’s production combined. It’s not possible to do that and keep the global economy functioning.

Do you suspect that prices will drop even further?

Today’s drop was the ‘current month’ contract, May. Tomorrow June will start to trade and it’s indicated around $22, many are pointing to that as a positive sign that the market sees a rebound in some time. Many experts I spoke to today don’t agree, they think when that contract trades, it will be sold because demand for oil will take much longer to recover than anyone has been forecasting.

Will it become more expensive to store the oil than to sell it?

It’s expensive to store oil and right now storage is near capacity, that’s one of the reasons you saw the collapse in price today. When a futures contract expires, it means the commodity will be delivered. The reason the price of oil went negative today is because if the oil is delivered there’s no where to put it. So yes, storage is a huge part of this equation.