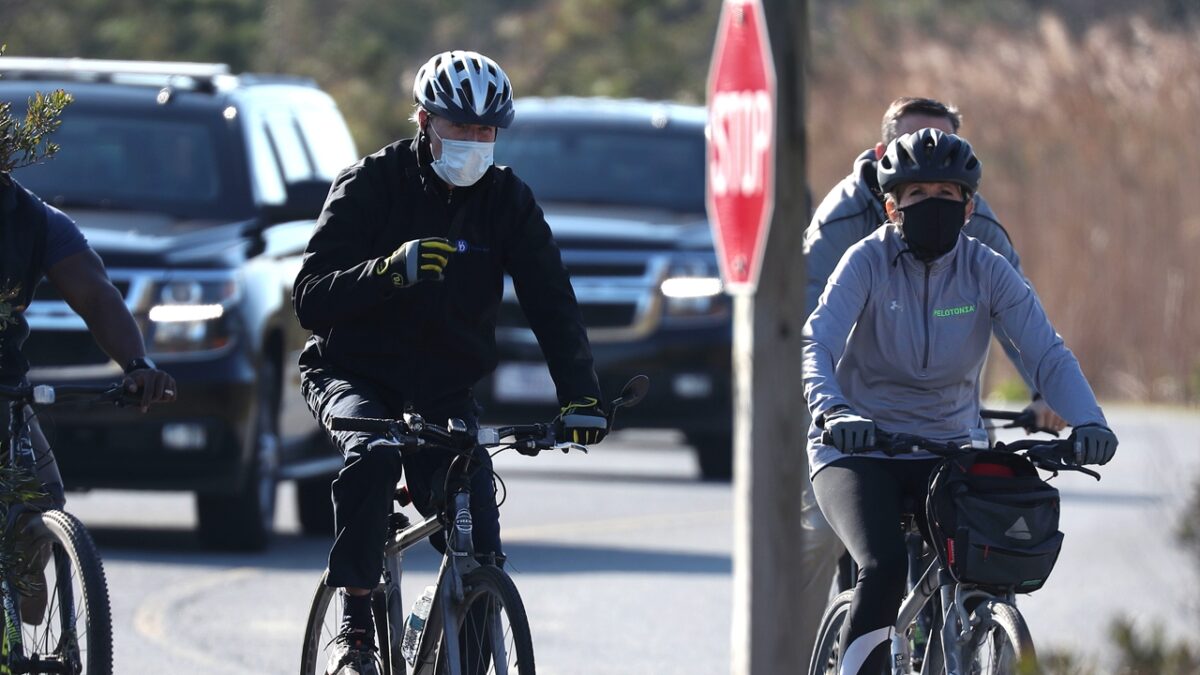 The New York Times sparked an intense online conversation by reporting that President-elect Joe Biden’s Peloton exercise bike is a betrayal of his hardscrabble Scranton roots, and a potential cybersecurity risk as well.

Martin Sheen famously began his television presidency with a crisis involving a bicycle and a sudden arboreal stop, but it seems President Biden won’t even have to move an inch to get into bicycular trouble. On Tuesday, the Times reported that Biden’s Peloton not only “doesn’t exactly comport with his ‘regular Joe from Scranton’ persona,” it also “could present cybersecurity risks.”

Apparently, the bikes have built-in microphones and cameras that will need to be removed, a task which shouldn’t flummox the United States Secret Service, and if it did, the flummoxing might be a genuine scandal.

The Times also devoted a big chunk of the article to the notion that ownership of the bike “clashes with Working Class Joe,” a new wrinkle in a story whose security implications were already well-worn by yesterday, and one which was highlighted by the article’s author, Sheryl Gay Stoltenberg, in a tweet.

“After a year of Covid deaths, racial unrest, a crushing recession, and a right-wing mob attacking my favorite building in America, it’s nice to write a fun story. Here’s one about ‘Joe from Scranton’ and his fancy exercise bike,” she wrote.

After a year of Covid deaths, racial unrest, a crushing recession and a right-wing mob attacking my favorite building in America, it’s nice to write a fun story. Here’s one about “Joe from Scranton” and his fancy exercise bike. https://t.co/2uLd1NXewJ

Reaction to the story among media, political, and other Twitter figures was a mixture of Peloton fans joining in the fun and double-standard-weary news consumers who saw the elitist angle as a shift from Trump-era media numbness back to Obama-era scandals like Dijon mustard, tan suits, and arugula.

The next item of Biden Peloton content must list his favorite instructor. My tip line is open! Also soliciting same information about the Obamas. Thank you in advance!

But I hear Joe Biden has a Peloton. pic.twitter.com/tRm0PXUWRv

the outgoing president literally has a fucking hotel and golf course chain named after him https://t.co/bopxsnQcA3

Didn’t Trump have a tanning bed?

This Peloton thing is ridiculous. Just stop. Biden isn’t even inaugurated yet and people are nitpicking his choice of exercise equipment. Perspective please.

I am SO HERE for the Biden/peloton discussion. I want to know who he rides with. My guess is @Pelotonjenn like me. And who does Dr. Biden ride with? This is such happy news! A peloton in the White House! https://t.co/5hMSOfFdya

I have an inkling that Biden is more of a 30-minute Club Bangers kinda guy https://t.co/TVgiez0xXQ

So……who do we think the Bidens’ favorite instructors are? https://t.co/EP4ELMEGNA

I’ve been consumed for the last 24 hours picturing what Peloton instructors Biden frequents.

If I were Biden, I would simply sign my first executive orders in a tan suit on my Peloton while eating Grey Poupon. https://t.co/s8njV3ZBuS

I see now that stringing up members of Congress on homemade gallows in an armed fascist takeover of the United States is temporarily off the table, we’re going to do that beige suit and Dijon mustard stuff again. pic.twitter.com/q7HAwe3okW

Ah, Scranton, a remote desolation where exercise bikes are unknown.

She thinks it’s “fun” to attack Biden over something literally no one cared about. Even people in Scranton exercise on Pelotons. https://t.co/kvoh2kCImt

And for the record, I own a Peloton bike and I love it.

With Trump out of the White House, people are going to have to find something to write about, which could make for a very long 4 to 8 years.