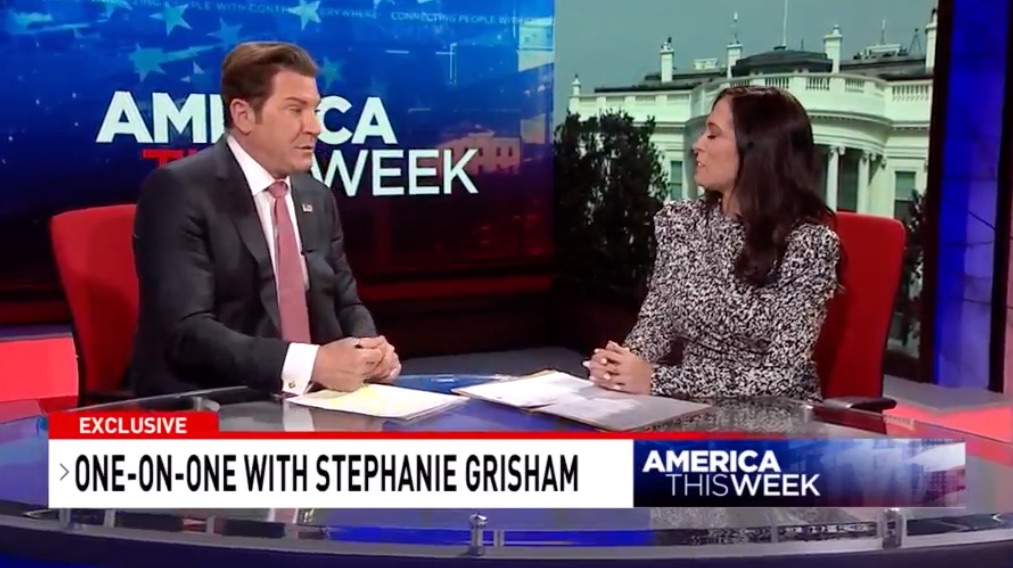 White House spokesperson Stephanie Grisham, who has not given a single press briefing since taking the job in July, revisited her previous day’s online beef with CNN in an one-on-one interview with Sinclair’s Eric Bolling, saying that it was “irresponsible” for two of that network’s reporters to tweet out that White House staffers were “freaking out” during the Iran missile attacks and that President Donald Trump would address the nation on Tuesday night.

In the aftermath of the twin attacks by Iran on Iraq, Grisham and CNN exchanged verbal volleys over the prospect of a presidential address about the incidents. The spat began when CNN’s Kaitlan Collins and Jeff Zeleny cited “two officials” and “aides” as sources saying a White House address was being prepared for Tuesday night. Grisham responded nearly an hour later disputing the claim, and added that no one had tried to contact her to confirm. CNN’s PR shop then weighed in, standing by the initial reports and called it “shocking” that Grisham was “completely out of the loop.” (Relevant portion of the video below begins at the 7:55 mark.)

“That’s par for the course,” Grisham told Bolling, when asked about CNN’s firm position. “A lot of outlets, not just them, will stand beside their anonymous sources, The fact is, that reporter, several reporters, did not check with us. They did not ask, they saw some people with some equipment and assumed there was going to be an address. It caused a lot of panic.”

“A lot of press came to the White House because of that tweet,” Grisham explained. “It would have been so simple to just ask us.”

But there was no official White House statement on Tuesday evening to let the press know if and when a possible address might take place. It wasn’t until 9:45pm EST that Trump tweeted out that he would not address the nation until the next day. Roughly 12 hours later, the White House press office announced that Trump would speak at 11:00am EST on Wednesday.

Grisham also dismissed as “inaccurate” CNN claims that White House staffers were “freaking out” about the president’s possible response to the Iran raids, but she notably did not mention staff or aides in her rebuttal.

“I was there. I was there the whole night,” Grisham said. “We were in meetings. [Trump] was calm, he had been briefed all day, he was briefed throughout the night. We waited until the morning to make sure there were no casualties and then he made his remarks. There was never a plan.”

“It was irresponsible,” Grisham added, referring to CNN’s reporting.

Grisham also used the same word to criticize MSNBC, for its decision to cite unconfirmed Iranian press accounts of dozens of US casualties during its Tuesday night broadcasts. Though NBC News reporters added caveats to the Iranian press accounts, some critics complained that the network too willingly repeated false, foreign propaganda.

“It was absolute propaganda, propaganda from a country that had just attacked us” Grisham said of the MSNBC reports citing Iran’s phony casualty numbers. “Of course, they’re going to say that because they’re trying to tell their people that they were successful.”

“So irresponsible, and didn’t check with us,” Grisham added. “I did not get an inquiry from that reporter, none of my team did.”

Watch the video above, via Sinclair TV.