Twitter Rips Matt Dowd for Yet Another Coronavirus Hot Take

Twitter Antibodies Attack ABC’s Matt Dowd for Yet Another Coronavirus Hot Take: ‘Are You F*cking High?’

ABC political analyst and former Bush strategist Matthew Dowd was raked over the coals for a pair of tweets about the coronavirus pandemic just a week after he was forced to delete another tweet that sparked an intense backlash.

Last week, Dowd resisted social distancing precautions by tweeting “Let us not let fear change who we are,” and faced a blistering social media firestorm that saw him eventually delete the tweet and clarify.

On Monday night, however, Dowd was at it again with a pair of tweets in which he agreed with President Donald Trump that the coronavirus is kind of like traffic accidents, in an argument against extreme mitigation measures that figure to have a devastating effect on the economy.

“I believe President Trump is right about at least one thing today. We must find a balance between protecting citizens health and protecting our economy. Decimating our economy in pursuit of fighting the virus doesn’t do our citizens any good in the short or long term,” Dowd wrote in one tweet.

Then in a monstrous display of not threading, quote-tweeted himself with the addendum “For example, there are 40,000 road deaths a year. We could eliminate that completely if we said people could only drive 20 mph, and only 5 miles a day. But doing that would wreck huge parts of our country economically and societally. We must find a balance.” 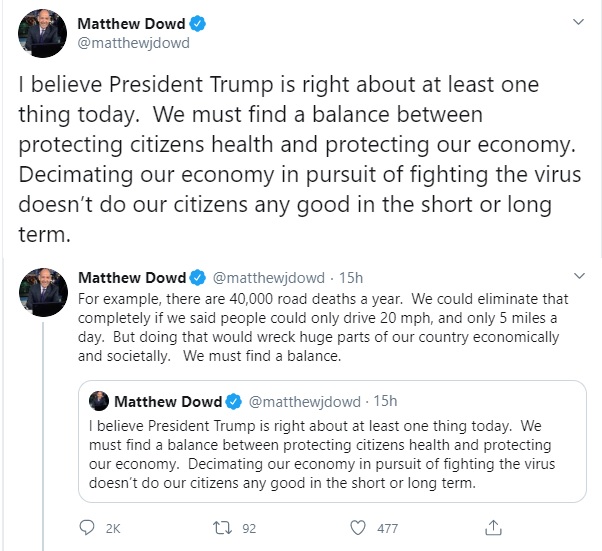 Before Dowd could move on to planes and trains, media figures and other prominent Twitter users gently pointed out flaws in his premise.

NBC News editor Benjy Sarlin praised Dowd for having the confidence to venture out of his social media groundhog den so soon after his last encounter with unfortunate viral opprobrium:

Health policy expert Charles Gaba offered Dowd the chance to be first in line to sacrifice for the greater good:

Are you volunteering to die since you’re a nonproductive leech on society? OK. We’ll redistribute your assets among those who actually do something useful, like migrant workers, nurses and garbagemen.

It doesn’t work that way. https://t.co/CpF0wircCc

Others took slightly more seconds to take apart Dowd’s analogy and/or decry the moral implications of it:

This analogy completely breaks down when you ask yourself a) how would the picture look if there were 40,000 road deaths *a month* and b) how would it look if 1 out of every 3 cars could cause a nearby car to have brake failure and crash. https://t.co/I33b91Fbql

Let’s make it plain. 2,200,000 of us cld die in the US even WITH social distancing. https://t.co/0fP4syryLC Millions. We are already becoming the world’s epicenter of #Coronavirus. 40% of hospitalizatiins are adults 20-54. We ignore our health experts, more people will die. https://t.co/2HEU9VrBax

We’ve only been inside for a week. https://t.co/CwA1GFnSoF

This analogy becomes especially absurd when you realize that there will be a surge in automobile deaths if we just “turn the economy back on” during the pandemic because there won’t be enough hospital beds to save crash victims. https://t.co/R7qSL0we2E

The more apt question that is actually analogous to the virus: If you could prevent 95% of ALL future road deaths forevermore, would you stop driving for a month? https://t.co/F7CrqSo265

This guy’s brain is broken.m and has lost the ability (if he had it) to think about complex issues in nuanced ways. Any network that puts him on to opine is committing malpractice. https://t.co/F7CrqSo265

The economy can come back.

Cutting off transmission is the only way to prevent millions of deaths https://t.co/p5JVIMVHRJ

Thank god we have Matthew Dowd to decide who lives and who dies so that his stock portfolio survives. https://t.co/h4nRDtr6Pc

It took Republicans one week indoors to say fuck it lets all die https://t.co/IhK4QbCb7i

There were even some mean ones.

Dowd sparred with a few of his critics in the replies, but the tide of backlash continues to rise.

In Dowd’s mild defense, he’s not the only one crediting Trump’s analogy. On Monday night’s All In with Chris Hayes, host Chris Hayes said there was a “kernel of truth” in the argument, telling his guest that “the speed limit could be 35 miles per hour everywhere on every highway, and that would almost certainly save lives and we don’t have that because there’s a trade off between efficiency and life.”

Hayes went on to point out that this particular effort, though, would likely not even have the desired effect of saving the economy, and like many of Dowd’s critics, has said it would make that situation worse.

But the premise itself, morality and practicality aside, ignores the fact that these efforts are temporary measures to mitigate and eliminate deaths from a pandemic for which there is not yet a vaccine or a proven treatment, and whose true scope remains unknown thanks to a continued lag in testing.

Watch the clip above via MSNBC.