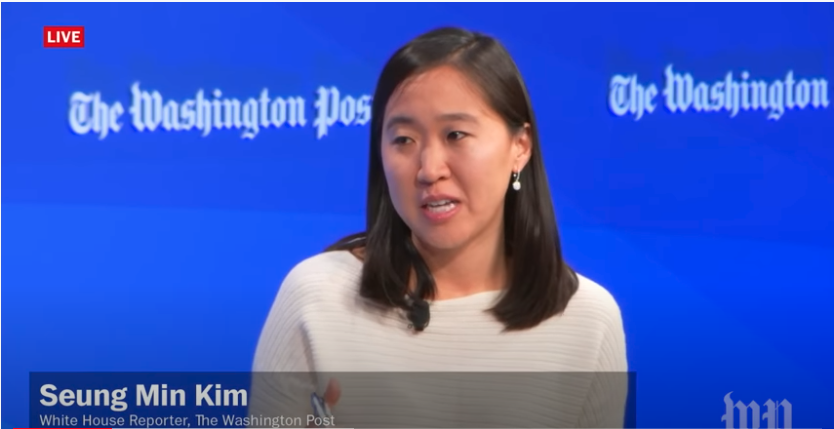 The Washington Post has issued a statement in support of White House reporter Seung Min Kim, who has come under attack after showing Sen. Lisa Murkowski (R) a critical tweet about the Alaska senator from Neera Tanden, President Joe Biden’s nominee to run the Office of Management and Budget.

Washington Post Vice President of Communications Kristine Coratti Kelly tweeted a statement from Post national editor Steven Ginsburg Thursday that defended Kim, who is Asian-American, saying that she was practicing “basic journalism,” and that the attacks on her have been “racist, sexist, and ill-informed.”

The statement read in part:

“A picture of Seung Min showing the tweet to Murkowski was posted to Twitter, which led to a flood of racist, sexist and ill-informed attacks aimed at Seung Min. The racist and sexist attacks have been vicious – and typical. She and other minority women endure vile, baseless attacks on a daily basis, no matter what story they are working on or tweeting about. The attacks on her journalistic integrity were wildly misguided and a bad faith effort at intimidation.

What she did was basic journalism. In reporting about Tanden’s tweet, she asked Murkowski for comment. Murkowski had not seen the tweet, so Seung Min showed it to her. This is standard practice. If the subject of a story is not aware of the information they are being asked to comment on, reporters share it with them. This only makes sense and is the fair and responsible thing to do.

No one should have to deal with the hate that has been directed and Seung Min. She did her job, and she did it well, like she always does. We could not be prouder that she is our colleague and a reporter for the Washington Post.”

The picture of Kim showing the tweet to Murkowski was originally posted by Huffington Post journalist Igor Bobic.

“High on my own supply? That’s interesting” pic.twitter.com/gdhaYpQuvf

No offense but this sounds like you’re high on your own supply.

You know, we know, and everyone knows this is all garbage. Just stop. https://t.co/0MzDYCpDyc

The attacks on Kim following Bobic’s post have been, as Ginsburg said, vicious and racist, although Kim has also received support from high-profile journalists, including Jake Tapper, Yashar Ali, Daniel Dale, and Bobic himself.

? Garbage. Ignore them. Journalists asking politicians to respond to what other politicians have said about them publicly wasn’t invented today. Sorry you have to deal with such hateful ignorance.

Horrible. So sorry you have to deal with this.

You can’t physically make someone look at a phone/paper if they don’t want to. What do you want me to do, put a senator in a headlock? Tape it to their forehead?

Murkowski is one of the few who did look https://t.co/gXeZQ5zObk