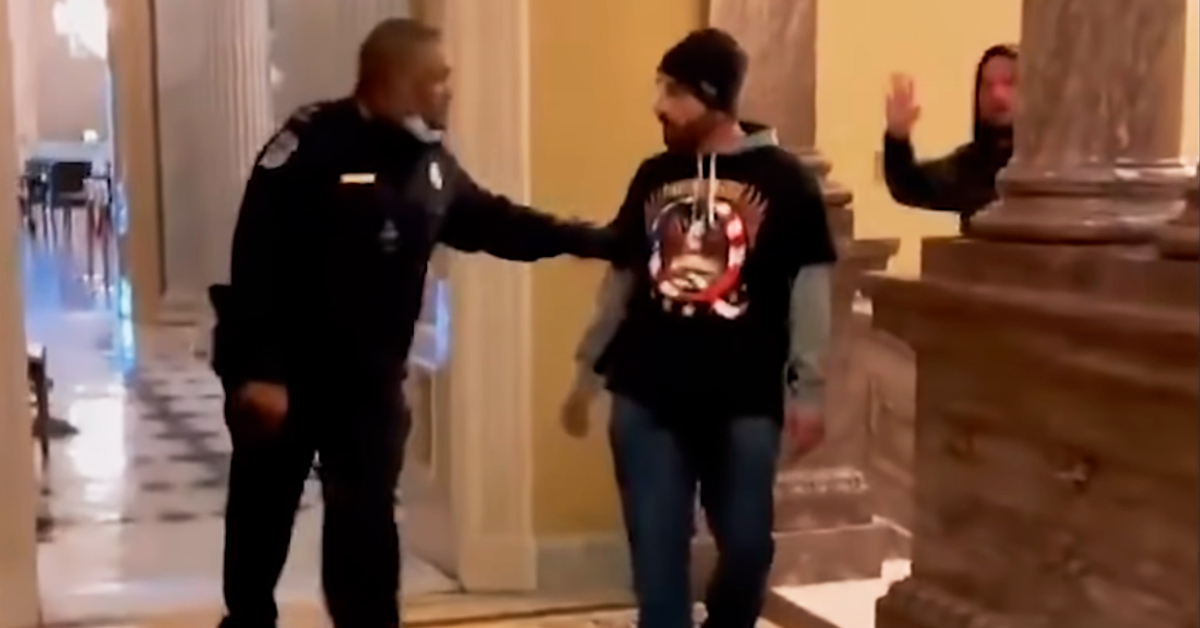 A member of the United States Capitol Police is being hailed as a hero after he apparently led President Donald Trump’s supporters away from the U.S. Senate chambers during the storming of the Capitol.

Huffington Post reporter Igor Bobic was in the Capitol during the Trump-incited insurrection, and he shared numerous photos and videos to document the events that took place that day. One of the most alarming things he posted on Twitter was a video of Officer Eugene Goodman, who tried to confront the mob alone before they reached the Senate chamber.

Here’s the scary moment when protesters initially got into the building from the first floor and made their way outside Senate chamber. pic.twitter.com/CfVIBsgywK

The Washington Post reports that during the encounter between Goodman and the mob, other members of the Capitol police were “frantically racing around the chamber trying to lock down more than a dozen doors leading to the chamber floor and the galleries above.” The mob’s advance forced Goodman to retreat up the stairs, but the footage shows him shouting “second floor” into his radio, alerting his colleagues that the mob was getting closer to the Senate.

Goodman took another stand against the mob at the top of the steps, where he briefly turned to his left and saw that the main entrance to the chamber was not completely secure. Goodman then seemed to bait the leader of the crowd, identified as Doug Jensen, into following him away from the Senate doors and into another room where back-up was waiting for Goodman.

Jensen was arrested days later, as were other members of the mob who were identified and charged in connection to the riot.

Looking back on the chaos, Goodman’s actions appeared to buy the Capitol Police time to secure Congress and stopped the insurgency from possibly reaching lawmakers while they were still vulnerable. As such, numerous political observers have taken to Twitter to express their horror of what could’ve been, and to applaud Goodman for controlling the situation.

I did not fully grasp what was happening in this footage when I first saw it. Now it seems clear that this officer tricked the mob away from the unguarded door to the Senate, using himself—a Black man—as the bait. He is a national hero. And lucky to be alive. https://t.co/l8RAyXrlk7

My thanks, Officer Goodman. THANK YOU. https://t.co/DwvUqCkW8M

Read this tweet by @harrisonjaime and the underlying tweet about what had been one of the most heart-stopping and frankly infuriating clips from the day of the MAGA putsch. With the actual context, this officer, Eugene Goodman, emerges as a singular American hero… https://t.co/f8AtirraFl

Give this cop a raise and a promotion. https://t.co/DCT8nRP9K6

this thread makes clear how close things came to being so much worse – avoided, in part, because of the actions of the Capitol Police officer @igorbobic captured on video —> https://t.co/Ukck9efOdg

They didn’t know it but an unlocked door to the Senate Chamber with members still inside…. was steps away to their right. https://t.co/An9PspUGUk

A lot of people were saying (in response to this video) that it was strange that the officer kept retreating and letting them come in further but it seemed pretty clear he was leading them — away from the Senators and eventually toward backup.

Unbelievable to see many more details coming out ?

Senators and Congressmen, and yes VP Mike Pence were saved and secured LITERALLY SECONDS BEFORE the Trump-inspired mob overwhelmed Capitol Police and got to the chamber’s doors…

It was THAT CLOSE ? https://t.co/oREvKv6pSI

Officer Eugene Goodman stopped a mob of white rioters from entering the chambers of the United States Senate.

At this perilous moment in our nation’s history, he was the one person standing between democracy and the rule of tyrants.