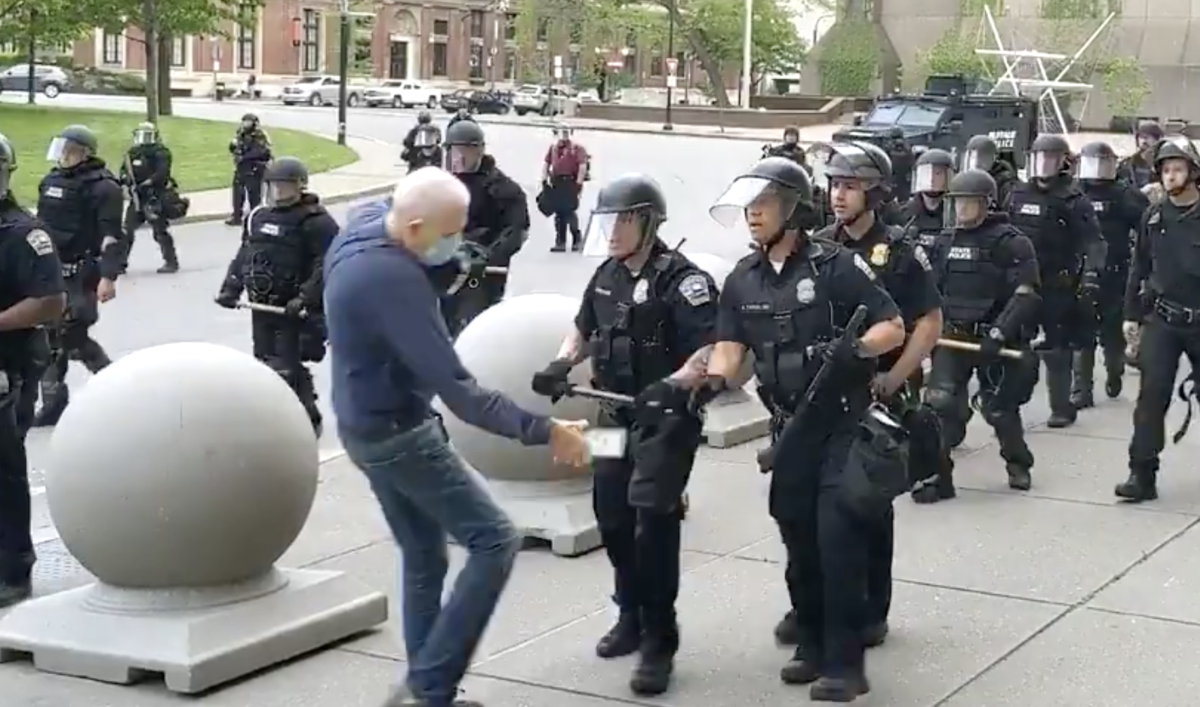 A graphic video of two Buffalo cops knocking a 75-year-old man to the ground went viral Thursday night after the city’s police department initially said in the statement that “one person was injured when he tripped & fell” during a skirmish.

The video, captured by Buffalo’s NPR station, WBFO, shows a cordon of dozens of officers in riot gear walking abreast as a gray-haired man approaches and then appears to peacefully engage them in front of Buffalo City Hall. But he is quickly strong-armed and violently pushed backwards. He briefly disappears out of frame, but a second later, the video shows the man lying stunned, flat on his back on the concrete sidewalk, a pool of blood rapidly forming under his head. The cops, rather than stop and render aid, walk past and begin to arrest other protestors, while one unidentified officer can heard claiming the injured man was bleeding out of his ear.

New Tonight: Disturbing video from @WBFO in Buffalo, NY shows an elderly man walk up to police in riot gear. An officer shoves the man…he falls backwards, hits his head…starts bleeding immediately…motionless.
Why did this happen @BPDAlerts ?
pic.twitter.com/qbTvXAAPLH

Spokesperson for Buffalo PD says the man tripped and fell.

The video clearly shows Officer Aaron Torgalski shoving him to the ground.

Now do you get what we’ve been saying about the police being too violent? pic.twitter.com/qs6Mv0hOGk

The department initially released a statement saying a person was arrested — their fifth arrest of the night — during a “skirmish” and “during that skirmish involving protesters, one person was injured when he tripped & fell.” The police were reportedly clearing the area of people who were out after curfew. Several videos from different angles show that at least one officer pushed him and there was no evidence of physical provocation on the elderly man’s part.

Since the video went viral, the Buffalo police department has announced that the two police officers involved in the incident have been immediately suspended without pay by Buffalo Police Commissioner Byron Lockwood and an internal investigation is underway.

Some have noted that the incident took place in the spot nearby where Buffalo police officers knelt alongside protesters Wednesday night.

in the same spot where the video from buffalo was shot, cops were taking a knee yesterday. that’s why I don’t want to hear a fucking word about police showing solidarity for the protestors. a fucking word! pic.twitter.com/VUGaUHCeb5

Buffalo Mayor Byron Brown issued a statement late on Thursday night, saying he was “deeply disturbed” by the video and calling the incident “disheartening.”