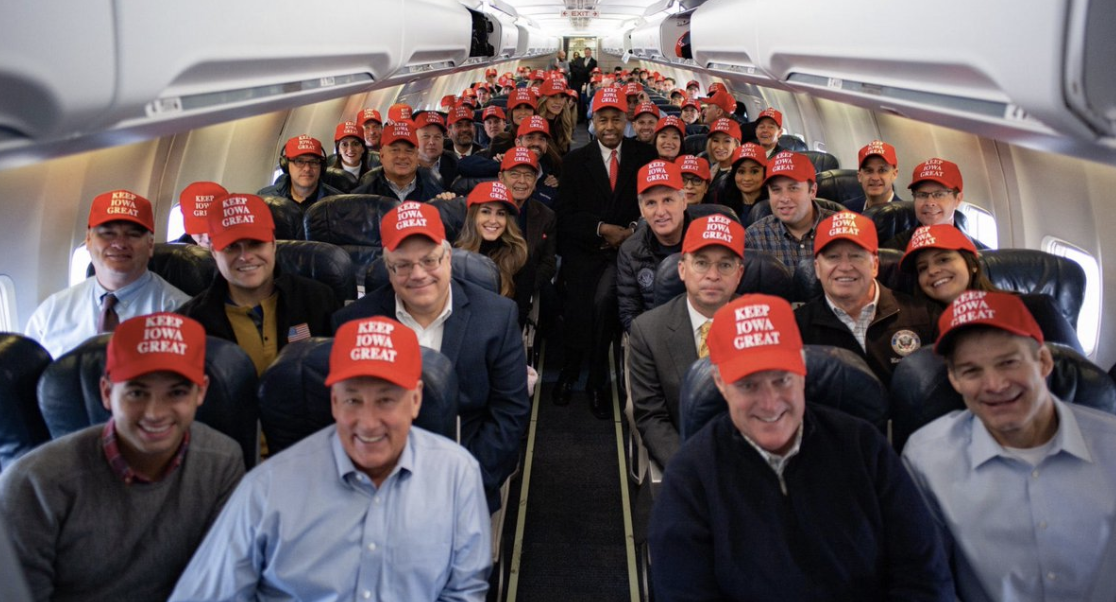 Former senator Claire McCaskill is under fire from Trump supporters for a tweet in which she points out former GOP 2016 presidential hopeful Ben Carson is the only person standing on a flight filled with MAGA surrogates to Des Moines, Iowa on behalf of the Trump campaign.

Carson – who is a person of color – was the only person who was pictured leaning up against a seat while partially standing in the aisle.

“One of these things is not like the others. Hint: they made him squat in the aisle, so he was visible,” McCaskill tweeted out along with the photo of the plane filled with Trump supporters donning “Keep Iowa Great” hats, a play on the “Make America Great Again” caps from the 2016 Trump win.

One of these things is not like the others. Hint: they made him squat in the aisle so he was visible. pic.twitter.com/aFxrRRjbPi

Twitter users responded by calling out McCaskill as “racist,” while Donald Trump Jr. added that Carson “is not a thing” but rather “a world renowned, life-saving neurosurgeon.”

You’re racist. That is all.

Did you just call a black man a “thing”?

I’m so glad you lost your seat in the Senate.

1. Dr. Ben Carson did not have a seat in this pic because he was sitting in First Class with my family

2. Dr. Carson is not a “thing,” he is a world renowned, life-saving neurosurgeon

You’re a racist and this is disgusting. https://t.co/NsouxXXd2Z

Late Tuesday afternoon McCaskill doubled down on her comment by tweeting, “Pretty sure pointing out a lack of diversity is not racist. Sorry Trump world.”

Ummm. Pretty sure pointing out a lack of diversity is not racist. Sorry Trump world.