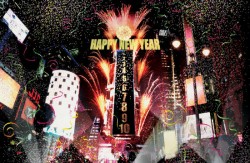 There’s no doubt about it: many people are eagerly waiting for 2016 to come to an end. But you’ll have to wait just a bit longer than usual this year for the ball to officially drop and ring in the new year.

Clocks around the world will add one additional second to the final minute of 2016 to compensate for Earth’s rotation on its axis, which has actually slowed slightly.

So who’s responsible for deciding for a monumental change that impacts the time-keeping abilities of the entire human population? The International Earth Rotation and Reference Systems Service (IERS), the group responsible for maintaining accuracy on global clock systems in accordance with the Earth.

The moon, which is spinning away from the Earth at a steady rate of 3.78cm a year, is one of the contributing factors to the clock change. Tide friction is also contributing to the slowing down of Earth.

The idea to add a second — in addition to a full day every four years — was first constructed in 1972 to account for the exacting specificity that the IERS demands.

As for the actual “leap second” itself? Well, it will be added to the world’s clocks at 23 hours, 59 minutes and 59 seconds Coordinated Universal Time (UTC). The official announcement from the US Naval Observatory earlier this year reads:

To authorities responsible for the measurement and distribution of time

A positive leap second will be introduced at the end of December 2016.
The sequence of dates of the UTC second markers will be:

26 additional leap seconds have been added since 1972. Of course, for some of us, this weekend’s clock change means one more second of the Twilight Zone marathon.