Actor Jeremy Irons On Gay Marriage: ‘Could A Father Not Marry His Son?’
video

Actor Jeremy Irons On Gay Marriage: ‘Could A Father Not Marry His Son?’ 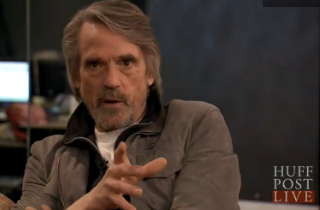 On Wednesday, Academy Award winning English actor, Jeremy Irons, sat down with Huff Post Live. When asked for his thoughts on gay marriage, Irons replied, “I don’t know… it’s a very interesting one that [issue]… I don’t really have a strong feeling…” but wondered about its ramifications [emphasis added]:

“It seems to me that now we’re fighting for the name, and I worry that it means somehow we debase, or we change, what marriage is. I just worry about that. I mean tax-wise it’s an interesting one, because, you see, could a father not marry his son?”

While host Josh Zepps interjected that incest laws would prevent such a union, Irons noted:

“It’s not incest between men. Incest is there to protect us from inbreeding, but men don’t breed, so incest wouldn’t cover that. Now if that were so, then if I wanted to pass on my estate without death duties, I could marry my son, and pass on my estate to him.”

Zepps countered again, noting that incest laws are not solely rooted in inbreeding concerns and that such a union would still be covered under incest laws.

Irons added that “lawyers are going to have a field day with same-sex marriage.”

Irons, who describes himself as a “complete libertarian,” also weighed in on New York City bans, reaffirming his opposition to the smoking ban (calling it the “tip on the iceberg”), the proposed soda ban, and “the nanny state.”