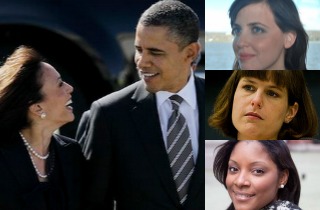 President Barack Obama is taking some friendly fire after he called California Attorney General Kamala Harris the nation’s “the best-looking attorney general.” The comment, your average feminist scholar will tell you, is representative of textbook sexual objectification. While progressive bloggers recognize that Obama is an ideological ally, many have come out and criticized him in unequivocal terms. Time to give credit where credit is due – liberal bloggers and self-described feminists who have called the president out over his comment did so in the face of waves of opposition from Obama’s supporters. They are deserving of praise.

“You have to be careful to, first of all, say she is brilliant and she is dedicated and she is tough, and she is exactly what you’d want in anybody who is administering the law, and making sure that everybody is getting a fair shake. She also happens to be by far the best-looking attorney general in the country – Kamala Harris is here,” Obama told the amused crowd at a Democratic fundraiser in California. “It’s true! C’mon.”

The first instinct among many was to mock conservatives for seeing any significance in Obama’s comments and prodding vigilant liberal bloggers who are eager to call out even the appearance of bigotry or discrimination in conservatives to exhibit some intellectual consistency.

The Washington Post‘s Jonathan Capehart wrote that Obama was “right about Kamala Harris,” noting that she is objectively pretty. Capehart’s intentionally obtuse defense of Obama’s comments was topped off with an insult to those who found them controversial.

Judging by some of the comments I’ve seen on Twitter you’d swear the president was guilty of luridly cat-calling a woman he doesn’t know. If I thought for one moment that’s what was going on, you better believe I’d hammer him for it. But that’s not the case here. Far from it. So lighten up, people.

Even BuzzFeed joined the act with a post by Rosie Gray and Ben Smith implicitly mocking the outrage over Obama’s comments by listing 13 of the “hottest attorneys general,” all of whom happened to be men.

The effort to deflate the controversy failed. Liberal feminists were not satisfied to let the comment go unremarked upon and did not fail to make their feelings known:

“This is hardly the first time Obama has been smarmily sexist under the guise of paying a compliment. In the same New York magazine story on Christine Quinn in which Mayor Michael Bloomberg was notoriously quoted saying, “Look at the ass on her,” Obama got a pass for a more politely phrased brand of creepiness,” wrote Salon.com columnist Irin Carmon.

Are you having sex with this person you want to tell everyone is attractive? Are you trying to get them to agree to have sex with you? Is attractiveness part of their job and thus a professional attribute to be discussed like any other? Are you, perhaps, the cheek-pinching great-uncle of this person and thus entitled to a little slack? (Joe Biden has gotten away with lots, apparently under that unspoken provision.)

“So far as I know, Obama can’t answer affirmatively to any of these questions when it comes to Kamala Harris,” Carmon concluded. “Fail.”

This could not have been an easy post to publish, as evidenced by this small sample of the accompanying reader’s comments: 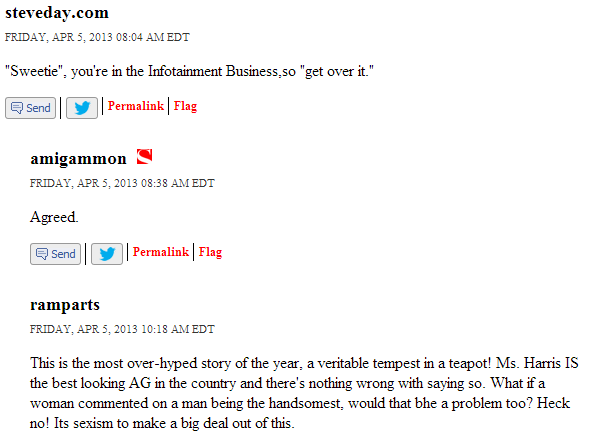 It goes on and on.

“President Obama is a feminist ally which is why it’s important to call this remark out, with love, in order to bring awareness to the issue of sexism in politics,” wrote The Grio columnist Zerlina Maxwell. “The president’s remarks, while mild mannered and with no malicious intent, are still problematic because they come in the context of a culture which more often than not values how a woman looks above everything else. The context of the president’s comments matter both in terms of the public setting with which they were made, and the sexist culture with which they permeate in our collective psyche.”

Multiple times in this post, Maxwell wrote that Obama is an “ally,” lest her readers mistake her critique of the president’s comment for a rebuke of his entire governing philosophy. Undeterred, her readers went ahead and did that anyway.

“This is absolutely ridiculous,” one commenter replied.

“Come on, Kamala Harris, wasn’t insulted, or offended, so everyone who wants to take offense, go ahead, but it’s not about everyone else, so I say butt out, unless and until she takes offense,” another wrote, identifying new parameters for identifying sexist remarks.

Maxwell’s copious responses on Twitter to her outraged fan base shows just how rarely they encounter a substantive critique of the president form the left. 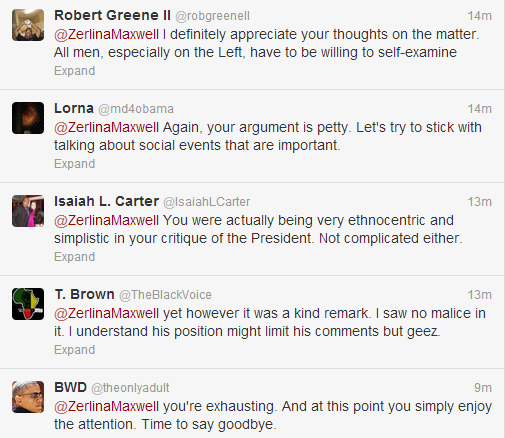 Arguably the blogosphere’s most anti-Republican (as opposed to pro-Democratic) self-professed feminist, Amanda Marcotte, has taken on “liberal sexism.”

“President Obama, despite having a mostly feminist policy record, occasionally screws it up on a personal level,” she wrote in Slate.

Obama has done so much good work in leaving a better world for his daughters and all other young women: He’s passed equal pay legislation, put two great women on the Supreme Court and made contraception access easier for women with health insurance. It’s a shame to see him undermine his enlightened policies with comments that highlight women’s ever-present decorative duties—especially when we know for a fact that such remarks erode women’s opportunities and even their own sense of deserving equality.

The outrage from Obama’s supporters – more than can be reproduced here – is indicative of the paucity of criticism of the president from the left. Yes, the president lobbed his supporters a softball pitch which allowed them to establish a measure of independence by criticizing his statement without even having to exercising a significant amount of intellectual rigor. Still, these tepid rebukes of Obama over an isolated incident were too much for Obama’s supporters to stomach.

The feminist bloggers who took a stroll off the reservation to admonish Obama deserve praise. They did so amid a flurry of criticism from their base of supporters. That takes courage. Good for them.