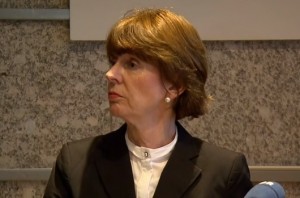 After a gang of a thousand men went on a crime spree targeting dozens of women in the German city of Cologne on New Year’s Eve, Mayor Henriette Reker advised women to adopt a “code of conduct” to prevent future sexual assaults.

“There’s always the possibility of keeping a certain distance of more than an arm’s length,” Reker said in response to a reporter’s question. “That is to say to make sure yourself you don’t look to be too close to people who are not known to you, and to whom you don’t have a trusting relationship.”

Reker also said that women should “stick together in groups, don’t get split up, even if you’re in a party mood.”

Our deutschsprachig readers can listen to the exchange below, starting 16 minutes in.

Feminist critics jumped on the remarks, saying that Reker was engaging in victim-blaming.

^ Mayor of Cologne Henriette Reke issues ‘behaviour guidance’ to German women, and not to the male perpetrators?? https://t.co/DNjZ58owEo

Cologne’s female mayor: women must “maintain arm’s length distance to strangers”. Everything about this depresses https://t.co/8qkrawHnmj

Meanwhile, conservative critics claimed she was deflecting blame away from the gang of men, who witnesses described as universally of Arab and North African origin. Reker has been a proponent of increasing the number of refugees taken in by Germany, and was even the victim of an attempted assassination in October for her pro-immigrant views.