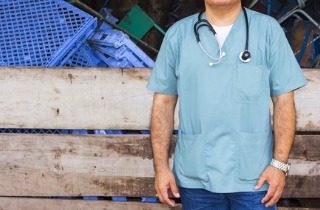 A U.S. airstrike in Afghanistan meant to take out threatening individuals ended up hitting a Doctors Without Borders hospital and killing roughly 16 people.

UPDATE –– 12:25 pm EST: The number has been updated to 19 dead (12 Doctors Without Borders staff and seven patients).

According to The New York Times, there was some potential concern about fighting near the hospital, with one local Afghan police spokesman saying Taliban fighters had been holed up inside the building.

Nine of the individuals killed in the strike were hospital staff. Doctors Without Borders confirmed those deaths in a statement wanting to know exactly how this could have happened:

As it does in all conflict contexts, MSF communicated the precise locations of its facilities to all parties on multiple occasions over the past months, including most recently on September 29.

The bombing in Kunduz continued for more than 30 minutes after American and Afghan military officials in Kabul and Washington were first informed by MSF that its hospital was struck. MSF urgently seeks clarity on exactly what took place and how this terrible event could have happened.

The U.S. military issued a statement confirming the airstrike, saying they were targeting threatening individuals and “there may have been collateral damage to a nearby medical facility.”

UPDATE –– 12:05 pm EST: USA Today reported that the death toll has risen again, to 22 casualties. The Pentagon stated that the U.S. Military would be probing the strike, and that NATO has called for a preliminary international investigation to come up with a report in the next few days.

Afghan news agency Pajhwok reported that the strike occurred after helicopters came under fire from Taliban ground forces that they said were hiding in the building. Spokeswoman Kate Stegeman denied this claim, saying that at the time “”only staff, patients and caretakers were inside when bombing occurred.”