Alan Colmes Says ‘Thanks, But No Thanks’ To Andrew Breitbart Conversion Effort 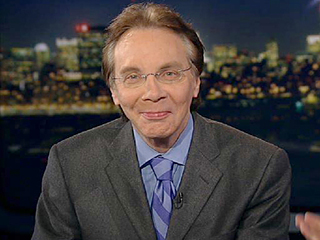 Given his many years working at Fox News, it may neither be the first nor last time Alan Colmes faces a conversion effort, though this may be the most high-profile. At an Right Online event on Friday, Andrew Breitbart read a supportive email from Colmes to the audience he was speaking with, and added that he would convert the world to conservatism “one Alan Colmes at a time.” On his blog today, Colmes replied graciously, though seems to have been scared off by angry commenters.

The email that gave Breitbart hope in Colmes’ potential came after Breitbart attempted to crash the progressive conference Netroots Nation and was rejected for not being a member of the media. Colmes sent Breitbart an email commending him for his work and condemning the response he received, adding, “assholes like that give liberals a bad name.” Breitbart then told the audience the world was theirs if they could “convert one Alan Colmes at a time.”

In response today, Colmes collected his favorite angry comments on the possibility of him joining the right from Gateway Pundit, adding, “with such a warm welcome to the right, how could I resist?”:

* What a waste of breathe.
* How? A brain transplant? I always thought you needed a trade-in for one of those.
* Don’t get too hopeful, Andrew. Pharmaceuticals may help, but Colmes is likely suffering from a rather severe form of liberal mental and spiritual disorder.
* You cannot convert sheer evil and Alan Colmes is sheer evil.
* there is no cure for stupidity…
* Which sex has Breitbart chosen for Alan? And good luck.
* The ONLY way to convert a radical socialist is with a bullet between the eyes. 100% efferctive.
* Human waste can be converted to fertilizer or energy. Has Breitbart chosen which of those he prefers for Colmes?
* Good luck. I have written numerous letters to Fox News trying to get Colmes off Fox News Watch because the man destroys a discussion…
* Alan Colmes is a moron – you’d have to give him a brain transplant before you could even start on giving him a logical thought, and even then the ‘stupid’ residue left over in his body would probably pollute his new brain.
* …Allen is a (white man) and as good as he is at sucking up to the kenyan fraud his head would be one of the first to be cut off! That is the only thing that will shut of that scum bag up!
* Wow! I was going to leave a comment but so far you commentors have said everything I can think of! Keep them coming folks these are great!

Say what you will about Colmes, but the man has good taste in terrible comments. That said, looks like Breitbart is going to have to work a little harder on this one.

Breitbart’s speech (via Colmes) below: