Mediaite Speaks With Anderson Cooper: “The Rest Of The World Feels Extraordinarily Far Away”
Q&A

Mediaite Speaks With Anderson Cooper: “The Rest Of The World Feels Extraordinarily Far Away” 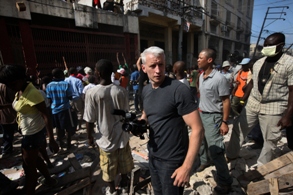 CNN has covered the Haiti story far more than any other cable news network – last week it was four times as much as Fox News or MSNBC.

And it continues this week, with CNN anchor Anderson Cooper remaining the most high profile correspondent still reporting on the ground (he’s there all week, and has been since January 13). Mediaite spoke to Cooper today (instead of “Back From Haiti” it’s “Still In Haiti”) while he traveled from “mass graves” to the Hotel Montana, where people are “digging for Americans foreign nationals.”

Mediaite: While other correspondents and anchors return to the United States, you are staying this week as well. What made you decide to stay an extra week?

Cooper: I just didn’t feel it was right to leave. I was just worried that if everyone leaves, then there’s going to be less focus on it. There are still a lot important things going on here. On a personal level, I just wanted to stay and continue covering the story. I talked to Sanjay [Gupta] and he felt the same way.

“What stands out in my mind has nothing to do with the coverage. It’s just seeing people, talking to people, who are digging through rubble with their own hands, trying to find loved ones or even complete strangers.” 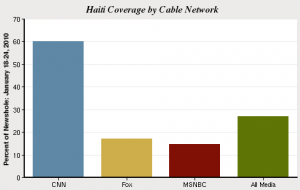 Mediaite: CNN has covered this story more than any other cable network. Why do you think it is important for CNN to stick with the story?

Cooper: It is hard to get sense of what others are doing. I just think this is a very important story. Obviously Haiti has a lot of connections with us, families have connections here. This is huge catastrophe, and Haiti as a country doesn’t receive enough coverage even in good times. It seems like the right place to be. Important things are happening in other places, in the political world. But it just felt like the least I could do is stay for another week.

Mediaite: I watched some of your show last night, and you covered other news as well – Scott Brown, the State of the Union. How are you able to anchor from Haiti and talk about other stories?

Cooper: It’s strange to talk about other topics – it feels strange when you’re here. The rest of the world seems extraordinarily far away. Obviously what’s happening here is life and death, and you’re confronted with that on an hourly basis. But there are other things people are interested in, other important things happening. We try to strike balance between where you are and other things.

>>>NEXT PAGE: Cooper responds to those who say he’s getting too close to the story.