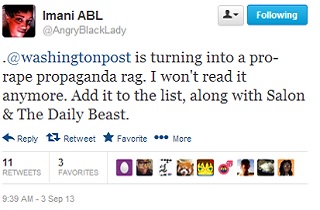 The Washington Post‘s resident excuser of horrible things, Richard Cohen, is at it again, and has drawn the ire of Angry Black Lady Imani Gandy, among others. The This Week In Blackness editor took to Twitter Tuesday morning to blast Cohen’s paper, tweeting “@washingtonpost is turning into a pro-rape propaganda rag. I won’t read it anymore.  Add it to the list, along with Salon & The Daily Beast.”

I’m citing Imani, not just because she makes a kick-ass headline, but because she so eloquently and effectively expresses the criticism that’s being directed at Cohen, and the paper:

(retweet of @dreamhampton’s tweet) I don’t care if @washingtonpost publishes never before seen pages from Betty Friedan’d diary, I’m never clicking one of their links again.

Do these shitlords have any idea how much the shit they write actually HURTS? It literally HURTS MY SOUL.

In addition to Cohen’s piece, Imani is also referring to a Friday WaPo op-ed that actually supported the decriminalization of statutory rape. The Cohen piece, which she links to using a url generated to deny WaPo search engine hits, is toxic in its overall premise that Miley Cyrus‘ VMA act somehow encourages rape (not rape-rape, though), but to get through that thesis, you first have to keep your lunch down for this:

She’s (Miley Cyrus) a cheap act, no doubt about it, but for me her performance was an opportunity to discuss one of the summer’s most arresting pieces of journalism — a long New Yorker account of what became known as the Steubenville Rape. Cyrus should read it.

Why are these the first two things you need to know about the “so-called Steubenville Rape?” An extremely charitable reading of Cohen’s piece would seem to indicate he’s trying to draw a distinction between the allegations that were made on social media and blogs, and the results of the Steubenville Rape Trial, but the problem there is that the two suspects weren’t convicted of “so-called rape,” they were convicted of rape.

Cohen goes on to allow that, even though not an actual rape, “what indisputably did happen is troubling enough. A teenage girl, stone-drunk, was stripped and manhandled. She was photographed and the picture passed around. Obviously, she was sexually mistreated.”

Sexually mistreated? I won’t go into the details of what the two rapists were convicted of, but sexually mistreated sounds like maybe they had on the wrong mood music, and got some baby oil in her eye. No. This was rape, not so-called rape, not a photo shoot gone wrong, and not “manhandling.” Why Cohen felt the need to diminish the rape is anyone’s guess, though, because this was all ostensibly a secondary point to his main idea, which is that Miley Cyrus is the real villain here. There are valid criticisms to be made about Cyrus’ performance, but inciting “so-called rape,” or any other kind, isn’t among them.

Along with Betsy Karasik’s lobbying for statutory rapists, Cohen’s piece goes beyond merely bad opinion writing, and into the dangerous territory of rape apologism. They are entitled to those dangerous opinions, but The Washington Post is not obligated to publish them, nor should they.