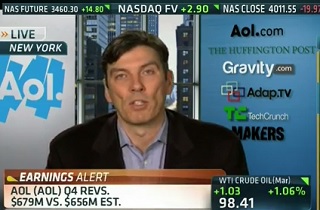 This may sound like an Onion headline composed by Jonathan Swift, but America Online CEO Tim Armstrong has apologized for comments he made in a conference call last week in which he partially blamed benefits cuts on a pair of, and this is a quote, “distressed babies that were born.” In an email Saturday, Armstrong apologized, and announced the restoration of the company’s 401k benefits matching policy.

Armstrong, also known for firing employees live during conference calls, took major flak over comments he made during an AOL conference call last week, as well as a CNBC interview in which he explained the change to his company’s 401k plan by blaming Obamacare.

The part of that CNBC appearance that got all the attention was Armstrong’s insistence on blaming unspecified Obamacare costs totaling $7.1 million for his decision to cut 401k benefits, but there were two other interesting things from that interview. Armstrong described the 401k match as “probably the last thing on the list for us in terms of employee benefits that we wanted to keep.” But a bit later, Andrew Ross Sorkin asked Armstrong about the potential harm of the 401k cut, and Armstrong called the 401k cut a “microscopic” part of their benefits package, and bragged about the company offering “free yoga, free gyms, free food in many offices,” all of which were presumably more important than leaving the 401k match policy in place. Armstrong also talks about the conference call he’s about to hold to explain the changes to employees.

Here’s the extended clip of that interview:

On that conference call, Armstrong laid the blame for the 401k change, which switched the company match from a per-pay-period match to an end-of-year match, at the tiny feet of two babies. From a transcript of the call, via CapitalNewYork:

After you’ve let the implicit lament in “distressed babies that were born” sink in for a second, consider the health care policy subtext that is also being missed in this, which is that the reason AOL took such a hit on those two expensive little infants is because the company is self-insured.

Self-insurance refers to group health plans (for people who get their insurance through work) that are self-funded, which means that instead of an insurance company actually paying the dollars to doctors and hospitals for employees’ claims, the company they work for pays them. They’re usually administered by an insurance company, which charges the employer a fee for that service.

Self-insurance is also not new, but it does put employees at significant risk. Self-funded plans are exempt from many state insurance regulations, including important patient protections, and a requirement to maintain a cash reserve sufficient to pay unexpectedly high claims. Unlike a fully-insured plan, which shares the risk with the insurance company by baking it into the premium, self-insured plans assume all of the risk for potentially expensive care. As it happens, they are also exempt from many of Obamacare’s provisions.

If “self-insurance” sounds familiar to you, it’s because self-insurance is one of the ideas that Republicans are putting forward as an alternative to Obamacare. That’s great as long as your distressed babies don’t come along and ruin everything by being born. Otherwise, not so much.

After considerable blowback, Armstrong apologized in an email Saturday, and put the old 401k policy back in place. Here’s the full text of the email, via email from edelman public relations:

We began our journey together in 2009, and for the last four years have had an employee-first culture. As I have said before, the ability to change is a strategic advantage for us. With benefit costs increasing, we made a strategic, financial decision last year to revise our employee matching 401K program from a per-pay-period contribution to a yearly lump-sum contribution. We then communicated this decision in the fall through multiple channels to every AOL office in the US.

The leadership team and I listened to your feedback over the last week. We heard you on this topic. And as we discussed the matter over several days, with management and employees, we have decided to change the policy back to a per-pay-period matching contribution. The Human Resource team will be in contact with all employees over the next week to explain the change and to answer any other benefits related questions you might have. We are proud to provide AOLers with a robust benefits offering that spans from exceptional healthcare coverage to 401K’s to AOL fitness programs and beyond. On a personal note, I made a mistake and I apologize for my comments last week at the town hall when I mentioned specific healthcare examples in trying to explain our decision making process around our employee benefit programs.

Thursday we announced an outstanding Q4 and end to our fiscal year. More importantly, it validated our strategy and the work we have done on it. AOL is positioned for future growth and our long-term strategy to be one of the world’s leading media technology companies.

Now, as we begin 2014, let’s keep up our momentum. Thank you for the great 2013 year and for your ongoing passion. And know that I am a passionate advocate for the AOL family – TA

This post has been updated to include the full text of Armstrong’s email.