Except even that dichotomy is fraught with a painful amount of nuance. For instance: Conservatives have a terrible track record when it comes to actually following through on fiscal responsibility. They are often obsessed with resisting military budget reductions, and seem less alarmed by government debt and overspending when those concepts fit their needs. And liberals often stray from a “live and let live” attitude on social issues into nannying that’s really just a progressive version of conservative social controls.

And that’s just the tip of what has been a decades-long, intra-libertarian debate.

Generally speaking, however, most people who know of libertarianism have come to know it as “fiscally conservative, socially liberal” people who are “on the right.” Ron Paul was a Republican congressman, after all. His son, the libertarian-leaning Rand Paul, is a GOP senator. Reps. Justin Amash and Thomas Massie both represent team R in the Capitol. You don’t see any libertarian Democrats on the national stage, with the exception of Rep. Jared Polis occasionally acting like one on key issues.

And so the argument goes: Conservatives are more tolerant of libertarians. And while that may be true in some respects, a new Reason-Rupe poll suggests it’s not so cut-and-dried: 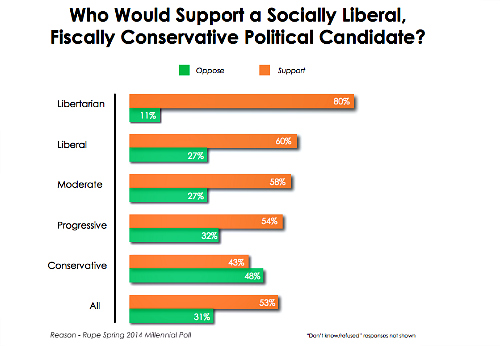 Besides libertarians (obviously), liberal millennials indicated the most support for a classically “libertarian-leaning candidate” by a margin of 60 to 27 percent. Conservative millennials, on the other hand, are the most opposed (48 percent) to such a fiscally conservative, socially liberal candidate (“the presidential equivalent of a unicorn,” perhaps).

More from the findings:

A libertarian-leaning candidate would appeal to both Democratic and Republican voters. For instance, 60 percent of Hillary Clinton voters, 61 percent of Rand Paul voters, 71 percent of Chris Christie voters, and 56 percent of those who approve of President Obama all say they would support a fiscally conservative, socially liberal candidate.

Also interesting: A plurality of those surveyed millennials who described themselves as “liberal” express incredibly libertarian undertones. 33 percent explained their liberalism as a simple belief in “social tolerance, openness, and personal freedom.” Many of the respondents reportedly said they were liberal because people should have freedom to do what they want in their personal lives without government interference — a classically libertarian belief.

Of course, this is just one poll, and it would be impossible to attempt to answer this article’s question based on the results alone. But it should provide some more insight, especially when combined with how some conservatives treat libertarians when the going gets tough.

To wit: There’s the GOP’s historically poor convention treatment of Paul supporters; the incessant scapegoating of Libertarian candidates for GOP losses, even despite mathematical impossibility; the perpetual misunderstanding of what libertarians believe in; the conservative belittling of libertarian causes; the penchant for selecting terrible candidates and then getting pissy when libertarians hesitate to get behind the false choice; and plenty of embarrassing moves that make libertarians want to crawl under a rock.

Then again, if libertarians were somehow a faction of the Democratic Party, one can’t help but imagine the same exact ostracization would happen.