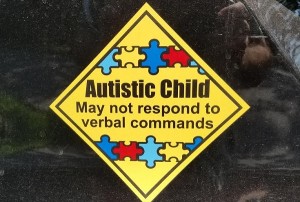 The police shooting of heroic, unarmed therapist Charles Kinsey brings into sharp relief a terrifying bit of intersectionality, particularly considering the police officer’s latest excuse for the shooting. The Black Lives Matter movement has focused attention and political muscle on the issue of police use of excessive force against black people, and in this case, that phenomenon might just have saved the life of a young autistic man.

On Thursday, video surfaced of North Miami police shooting the unarmed Kinsey as he lay on his back with his hands up trying to explain to them that his patient was holding nothing more dangerous than a toy truck. Since then, the police officer’s reunion released a statement saying that the officer was actually trying to shoot the autistic kid with the truck, but accidentally hit Mr. Kinsey. Whether or not you believe the Magic Racist Bullet Theory (I don’t), there’s every reason to believe that without Mr. Kinsey’s intervention, that young man might be dead right now. Thank God he’s alive to tell the tale.

Parents of autistic children face a dread that is similar to that faced by black parents in many respects, yet very different in others, regarding the prospect of their kids having an encounter with police. No matter how much you try to prepare your kids, you know that their lives can depend almost entirely on what kind of “apple” they get in a police encounter. Black parents have the “advantage” of being able to have “the talk” with their kids, an option that just isn’t there for many parents of autistic children. On the other hand, black children face many more interactions with police than autistic kids, and many more chances for something to go wrong.

Interactions between police and autistic people are much fewer and farther between, but when they go wrong, they really go wrong. A big part of the problem is training, because all the things that cops like to do to maintain control of a situation, the yelling and restraining, only serve to heighten the agitation of an autistic person who already may not be able to understand, much less explain, what’s going on. The result can often be tragic, as it almost was in the case of Mr. Kinsey’s patient. Police encounters often escalate simply over failure to comply with police instructions, which many autistic people cannot do.

The good news is that there has been a concerted effort to raise awareness and improve training, but it’s still a crapshoot which kind of cop your kid will run across when he’s in trouble. Awareness is also a double-edged sword, because while there’s a community of self-advocates trying to help and support autistic people, they face an unexpected enemy. For several years now, autistic people have been the subject of a vicious and slanderous campaign to paint them as violent, potential mass murderers, and to devalue their lives to the point of excusing the murder of autistic people, all of which has been carried out by the self-involved parents of autistic children. Just this month, celebrity autism mommy Polly Tommey told a group of parents that she would “never judge” parents who elected to murder their own autistic children:

Tommey was promoting the new ant-vaccine quack film “Vaxxed,” but this sort of thing isn’t restricted to dark internet hidey-holes, it’s promoted by the likes of CBS News and MSNBC, particularly by autism parent Joe Scarborough, and it’s the kind of thing that makes “No, I wasn’t trying to shoot the unarmed black guy, I was aiming for the unarmed autistic kid” sound like a good excuse to a cop.

Luckily, there are also autism parents and caregivers like Charles Kinsey, who would literally take a bullet for these kids, or the cops and teachers and aides in my town and at my son’s school, who love him like one of their own, and to a large degree, autistic people can be kept away from risky encounters with police. But it’s incidents like the Kinsey shooting that illustrate the folly in spitting the “All Lives Matter” retort at Black Lives Matter.

Police unnecessarily shoot and/or use force against all kinds of people, either out of bias or incompetence or fear or a combination thereof, but black people are the canary in the bad policing coal mine. Whatever lessons cops learn policing them might eventually trickle on over to you, or at best waste time and energy that could be spent serving and protecting you. Police accountability is good for everyone, especially for good cops.