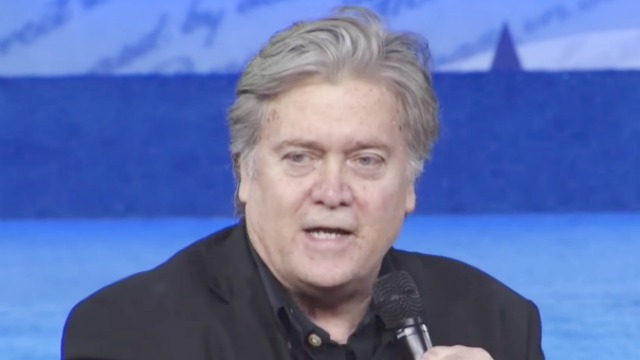 It seems that Steve Bannon was quite unimpressed with how Donald Trump Jr. and Jared Kushner handled their controversial meeting with a Russian lawyer during the 2016 election.

Bannon spoke at length about the incident to Michael Wolff for the USA Today columnist’s upcoming book, Fire and Fury. The former White House chief strategist’s unreserved comments for the book were published in a new report by The Guardian, and it looks like he had a lot of contempt for how Trump’s campaign conducted the meeting in which they hoped to obtain foreign intel to damage Hillary Clinton.

Bannon remarked mockingly: “The three senior guys in the campaign thought it was a good idea to meet with a foreign government inside Trump Tower in the conference room on the 25th floor – with no lawyers. They didn’t have any lawyers.

“Even if you thought that this was not treasonous, or unpatriotic, or bad shit, and I happen to think it’s all of that, you should have called the FBI immediately.”

Bannon went on, Wolffe writes, to say that if any such meeting had to take place, it should have been set up “in a Holiday Inn in Manchester, New Hampshire, with your lawyers who meet with these people”. Any information, he said, could then be “dump[ed] … down to Breitbart or something like that, or maybe some other more legitimate publication”.

Beyond Bannon’s apparent diss against his own news outlet, he was also quoted blasting President Trump’s decision to fire former FBI Director James Comey, and hinted that Robert Mueller’s investigation won’t end any time soon. Bannon also commented that the investigations into Russian collusion will now focus on money laundering, and could put Trump Jr. and Kushner under a great deal of pressure.

“They’re going to crack Don Junior like an egg on national TV,” said Bannon. “Their path to fucking Trump goes right through Paul Manafort, Don Jr and Jared Kushner…It’s as plain as a hair on your face.”