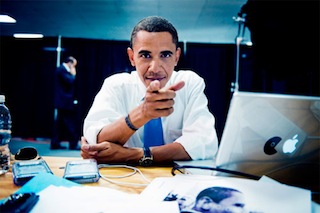 You know that friend of yours who’s always the first to get in on the hottest social media trends? The one who had a Tumblr before everyone? The one who first sent you a Google+ invite? Well, remember that one time that your hip friend made a big misstep? Like he joined some online service which lets you tag people in your dream journal or “like” porn videos and he swore that it was gonna be the next big thing even though it clearly wasn’t? Yeah well, today, President Obama’s campaign staff is kind of like that as they’ve initiated a day-long project to tweet out the Twitter names of every Republican Congressmen state by state…in individual tweets.

Great idea to help people contact their representation, right? The 10,000 people who have unfollowed Obama in the past few hours seem to disagree.

It all started this morning when the campaign, previously lauded for its tech savvy these two tweets:

Soon the deluge started as the official Twitter account began to go through each state, listing the names of every Republican representative that has an account themselves. Anyone following the President soon found their Twitter feed filling up with messages that basically had, at best, a one in 50 chance of being relevant to them in anyway. 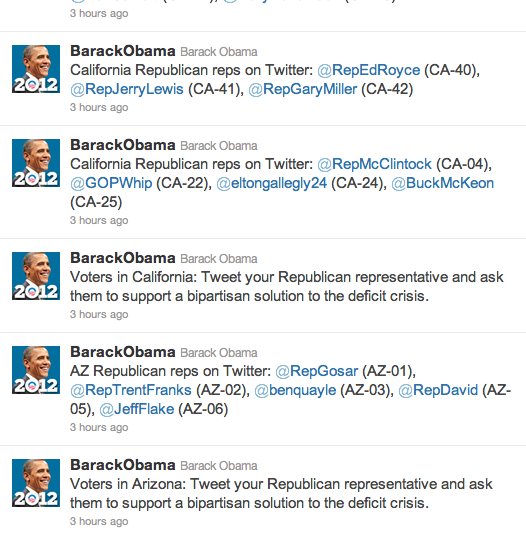 Hey, remember that funny Onion story about Obama sending the entire country a “rambling 75,000-word e-mail” that the Fox Nation reported as true? Well, this is as close as we’re gonna get to it actually coming true.

The idea is clearly to get constituents to overwhelm the Twitter accounts of these Congressmen and women with tweets and retweets to force them to see the will of the people. However, didn’t they realize that, to do this, they’d be overwhelming all of the President’s followers first? The idea may be working in that each individual tweet already has at least a hundred retweets, but the huge negative response from Twitter at large is quickly becoming the main story.

Over the past few hours, the President’s Twitter account has already lost nearly 10,000 followers. That may not seem like much considering he has nearly 10,000,000 and every day the number changes by a couple grand or so. However, when the number moves, it moves upwards. And that’s always. According to TwitterCounter.com, Obama’s follower count hasn’t ever trended significantly downward in six months.

The worst part is, as we speak, someone is definitely getting screamed at for this error in judgement but it’s not like they can stop. To stop the list would be to admit that they made a mistake and that would be even worse. So the list continues unabated and, presumably, the follower drop off will as well.