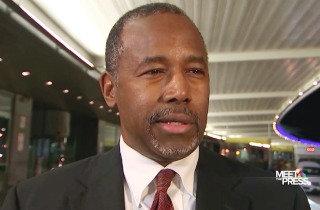 Republican presidential candidate Ben Carson told the Associated Press that major changes to his campaign staff were imminent. When reached for comment, Carson’s campaign manager had no idea what said changes were — let alone that the AP interview had taken place.

According to the Associated Press, Carson said that “personnel changes” were forthcoming during an interview in his Maryland home.

When reached for comment on the matter, Carson’s campaign manager, Barry Bennett would not respond immediately. Mainly, he stressed, because he had no idea what the AP was talking about.

“I’m getting ready to have a conversation with him,” said Bennett. “Why don’t I have that conversation and call you back.”

The article suggests that Carson’s impromptu announcement comes after weeks of lagging poll numbers and poor debate performances. While his campaign has outperformed many of the others in terms of fundraising, the retired neurosurgeon’s soft-spoken demeanor has worried potential voters when it comes to hard issues like terrorism, race and immigration.

“I recognize that nothing is perfect,” he said. “I think I have to directly address the issue.”

.@realBenCarson statement on staff shakeup: "I have 100 percent confidence in my campaign team." –@KFaulders pic.twitter.com/ypAOaQoACo